Retail sales numbers out of the United States will be scrutinized on Tuesday as investors try to keep alive hopes of a 0.50% rate cut by the Fed later this month. The retail sales data will be published at 12:30 GMT and will be followed by industrial production figures at 13:15 GMT. With the Fed July meeting fast approaching, the data could determine whether policymakers decide to go for a 25-basis points reduction, or a steeper 50-bps cut. The dollar is likely to continue its knee-jerk reactions to the incoming data, moving in tandem with fluctuating expectations of a 50-bps rate cut.

Consumers in the United States form the backbone of the economy, hence, any deterioration in retail spending is seen as a sign of slower growth. Ordinarily, temporary weakness in consumption would be offset by one of the other main components of US GDP, such as business spending or net exports. But with both business investment and exports being weighed by the worsening trade uncertainty, they’re unlikely to provide much of a boost, leaving the economy even more reliant on domestic demand to drive growth.

Retail sales are forecast to have increased by 0.2% month-on-month in June, moderating somewhat from May’s 0.5% gain. Excluding autos, sales are also expected to have edged up by 0.2% m/m, while the ‘retail control group’ measure, which is used in GDP calculations and excludes autos, gasoline, building materials and food services, is also projected to rise by 0.3% m/m. 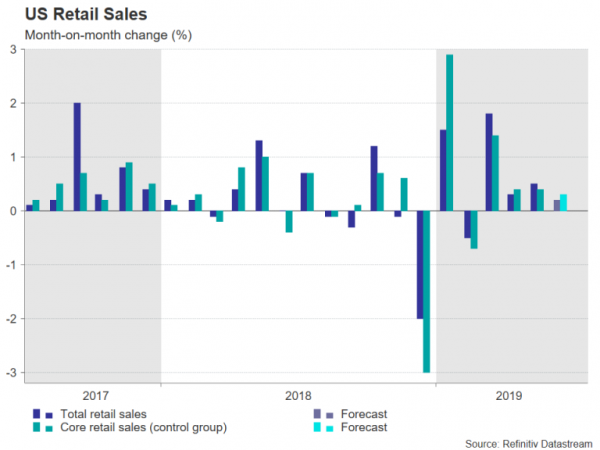 If the numbers come in as expected, they might not do much in shifting the market odds of a July rate cut as it would neither be bad enough to make the case for an aggressive easing by the Fed, nor would it be strong enough to give policymakers second thoughts about the need to lower rates.

The US dollar is likely to trade sideways in such a scenario. But with market expectations of 50-bps cut having risen to more than 20% following the Jerome Powell’s dovish testimony last week, stronger-than-expected retail sales figures could see those odds reverse again, lifting the greenback. Dollar/yen could recover towards the 50% Fibonacci retracement of the January-April upleg, around 108.68, with any break above it bound to meet stiff resistance at the 109 handle.

But should the data disappoint, speculation of an aggressive cut would intensify and drag the dollar lower. Dollar/yen could slip below immediate support at the 61.8% Fibonacci around 107.80, taking the pair closer to June’s 6-month low of 106.77.

Apart from the retail sales report, investors will also be monitoring the latest numbers on industrial production on Tuesday. Industrial output is forecast to have grown by 0.1% month-on-month in June, slowing from the prior month’s 0.4% m/m rate. Manufacturing output is projected to have fared slightly better, expanding by 0.2% m/m. If these numbers are confirmed, they would ease fears of an immediate recession. Another indicator on the US manufacturing sector will come on Thursday from the Philly Fed manufacturing index. 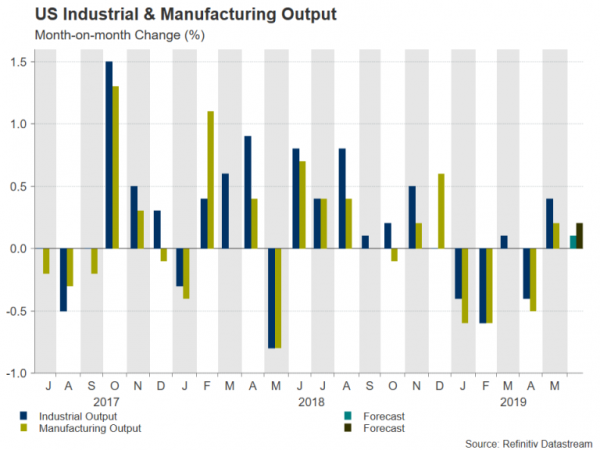 Should the data fail to provide a clear assessment on the American economy, investors will likely turn to the Fed speakers due to take to the podium this week, which include NY Fed President John Williams and Boston Fed President Eric Rosengren. Traders have so far brushed away hints of scepticism about the urgency for a rate cut by some FOMC members so any further signs of doubts in the run up to the July meeting has the potential to cause some upset in the markets.