The Fed is almost certain to slash rates by a quarter-point at 18:00 GMT on Wednesday. With such an action nearly fully priced in already, the market reaction may depend mainly on the rate projections in the new ‘dot plot’ and Chairman Powell’s remarks during the press conference. Considering the more tranquil tone on trade lately and stocks being near record highs, the risks seem tilted towards Powell putting a not-so-dovish spin on any cut, which may help the dollar end higher overall.

The US economy remains in decent shape – with growth running at around 2% and wages rising at the strongest pace in a decade – but all this is unlikely to stop the Fed from cutting rates again this week. The central bank is reacting mainly to external risks, attempting to safeguard the US from the negative effects of the trade war and a slowing global economy. Indeed, the latest ISM survey showed that the US manufacturing sector is already in contraction, vindicating the Fed’s proactive approach in cutting rates to ensure this weakness doesn’t infect the far-bigger services sector.

Of course, a rate reduction wouldn’t be any surprise for investors, who already assign an ~85% probability for a quarter-point cut. Hence, while the knee-jerk reaction in the dollar may be lower on the decision, the overall direction of the US currency and stocks will depend mainly on what signals policymakers send about the pace of future easing.

In that sense, all eyes will be on the new ‘dot plot’, which will contain updated rate forecasts about the next few years. The question is whether the new dots will signal another cut later this year, or not. Similarly, investors will scrutinize Powell’s remarks for any hints on this subject.

While the escalation in trade tensions since the Fed’s last meeting and the weakness in US manufacturing certainly justify a rate cut, other recent developments argue for the Fed to ‘keep its cards close to its chest’ and refrain from clearly signaling that more easing is likely soon. 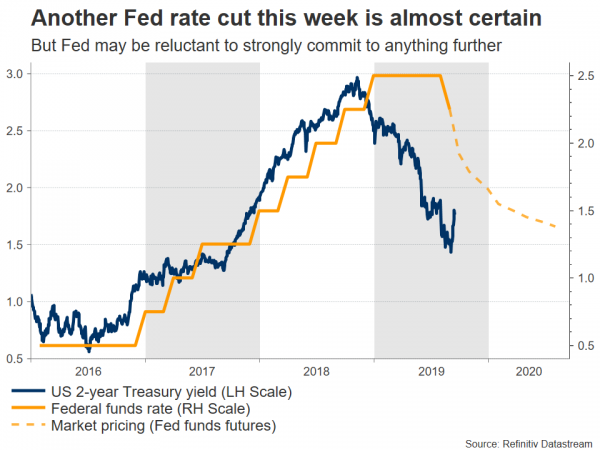 Washington and Beijing have struck a calmer tone on trade lately, postponing tariffs on each other in a gesture of good faith ahead of planned negotiations in early October. This provides policymakers some room to be patient and monitor what happens before deciding whether to act again. The risk of a chaotic Brexit next month has receded as well.

Meanwhile, the Fed may also start to pay attention to financial stability risks. Rate cuts usually boost stocks, and with American stock markets near record highs already, policymakers might be mindful of committing to more easing, for fear of unnecessarily juicing asset prices towards ‘bubble’ valuations.

The latest jump in oil prices due to tensions in the Middle East argues in the same direction, as it means higher future inflation, and therefore a reduced need for the Fed to signal aggressive cuts.

Bearing the above in mind, the risks seem tilted towards the Fed disappointing those that expect clear signals for future action. For example, the new ‘dot plot’ may not indicate a consensus for more cuts this year, or Powell could play down the need for more easing in his press conference, highlighting instead that the central bank will act only if the outlook deteriorates further.

If indeed the Fed doesn’t signal that another cut is imminent, that could boost the dollar while hurting stocks, as investors price out expectations for further action this year. Markets currently assign a ~40% probability for another move in October, which jumps to 85% for the December meeting, so there is plenty of room for a disappointment.

Taking a technical look at euro/dollar, a not-so-dovish tone could send the pair lower towards the 1.0985 handle, with a downside break opening the way for the 2½-year lows near 1.0925.

On the flipside, if the officials send enough signals that another rate cut is looming soon, euro/dollar may edge higher towards the 1.1110 area, where a bullish violation would turn the attention to 1.1165.

Looking beyond this meeting, the outlook for the dollar remains positive for now. The US economy, even if it is slowing, is still in a much better condition than any of its developed peers. Likewise, even if the Fed is cutting rates, it is doing so reluctantly, so the dollar is still more attractive than other major currencies from a carry perspective.

For this to change, the Fed would likely need to become much more aggressive – for instance by signaling that QE is back on the menu – which seems highly unlikely over the coming months.

Equities Sink After Negative US Session