The US Dollar depreciated against the Canadian Dollar, following the Canadian CPI data release on Wednesday at 12:30 GMT. The USD/CAD exchange currency rate lost 16 pips or 0.12% right after the release. The Greenback continued trading at the 1.3250 level against the US Dollar.

Statistics Canada released the Canadian CPI data, which came out better-than-expected of negative 0.1% compared with the forecast of negative 0.2%.

According to the official release: “Consumer prices for gasoline fell 10.2% in the 12 months to August, following a 6.9% decline in July. In contrast, natural gas prices rose 5.8% year over year in August, up from a 3.2% increase in July. Air transportation prices rose 10.3% year over year in August after increasing 4.6% in July. Canadians paid 6.5% less for fresh vegetables in August compared with July, marking the largest month-over-month decline in five years. The cost of meat grew 4.8% on a year-over-year basis in August, after rising 5.5% in July.” 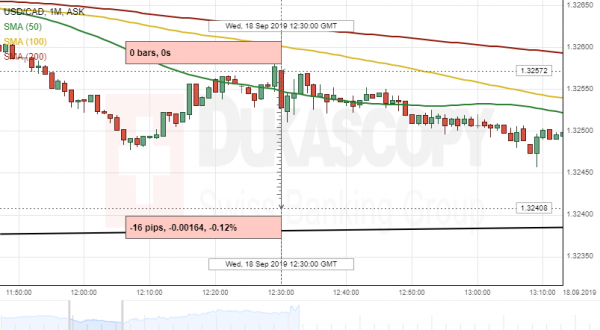