The Swiss National Bank (SNB) will announce its quarterly decision at 08:30 GMT on Thursday. No action is expected, though markets do assign an almost 20% chance for a rate cut. That said, since the SNB already boasts the lowest interest rates globally, it doesn’t have many ‘rate bullets’ left, so it may prefer to save its final rate cut in case a shock hits. The franc could spike higher if rates are indeed left unchanged, while its broader direction will depend on how risk appetite evolves.

Switzerland’s economy continues to struggle, with growth having slowed dramatically this year and inflation turning negative again in recent months. The latter is particularly concerning, as deflation is typically what a central bank is there to prevent. Falling prices could incentivize consumers to postpone some (large) purchases in anticipation of a lower price in the future, but if enough people think like that, then consumption collapses instantly and the economy enters a recession.

Therefore, it would normally be high time for the SNB to cut rates to stimulate growth and lift inflation back up. Indeed, markets are pricing in a one-in-five chance for an immediate quarter-point rate cut. 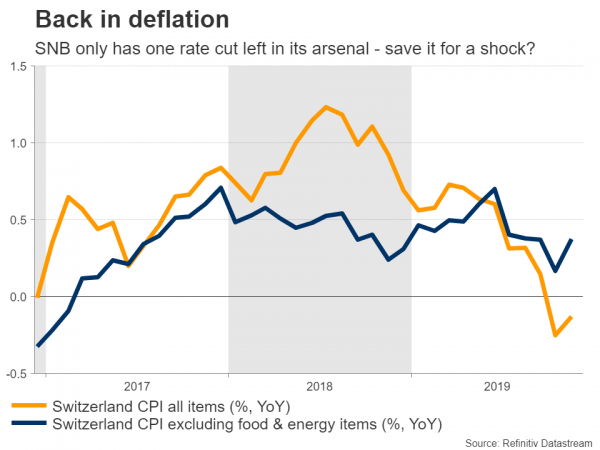 The problem is that the SNB has very limited room for more stimulus. Switzerland already has the lowest interest rate globally at –0.75%, and while it could theoretically be cut a little further into the negative territory, there’s probably only a single rate cut left in the SNB’s arsenal. Perhaps rates can be cut to -1.00%, but that’s most likely the lower bound.

Bearing the above in mind, the question becomes: will the SNB use its final ‘rate bullet’ right now or save it for a stormy day, for example, in case an unforeseen shock hits the economy?

The answer is it will probably wait. Not least because reducing rates further would infuriate the nation’s bankers, who are already complaining their industry is struggling, as negative interest rates hurt the profits of commercial banks.

The SNB will of course reiterate that it’s prepared to cut rates if needed, and that it will continue to use FX intervention to prevent any sharp appreciation in the franc. The SNB pays a lot of attention to the exchange rate. A stronger currency holds down inflation and makes exports less competitive abroad, so the central bank regularly intervenes in the FX market to weaken the franc, which tends to gain in times of global turmoil given its safe haven status.

Where does all this leave the franc? Bearing in mind the 20% chance for an immediate rate cut, if rates are left on hold, then the currency could spike higher on the decision as those easing expectations are proven wrong and priced out.

Beyond that, much will depend on risk appetite. As a haven asset, the franc typically gains rapidly if a risk-off event occurs in markets, and lately much of that has come from the trade war. From a monetary policy perspective though, the interest rate differentials with a currency like the US dollar argue for a slow grind lower in the Swiss currency.

In other words, although the franc could slowly surrender ground on ‘calm’ days owing to monetary policy, any episode that induces ‘panic’ in markets may trigger a sharp rally, potentially erasing weeks or months of losses. The flipside to that: the SNB would probably step into the market if the currency appreciated too fast, to sell francs and keep a lid on the currency’s gains.

Looking at dollar/franc technically, immediate support to declines may come from 0.9840, where a downside break could pave the way for a test of 0.9795.

On the upside, initial resistance may be found near 0.9915, before the 0.9975 area attracts attention.