Everything is in scope

The ECB meeting was without new monetary policy messages, but the expected strategic review was launched. We were glad to hear Lagarde mention the aim of having it concluded by the end of 2020 (after starting in January). Lagarde essentially indicated that everything is in scope and that they will turn ‘each and every stone’ for the review. They will also reach out to the ‘usual suspects’ (members of parliament, the academic community and civil society representatives). The review will also include technological change and climate change aspects. For a longer discussion, see our ECB preview, 6 December. During the press conference, Lagarde said that she does not see herself as a hawk or a dove but as an owl – a bird of wisdom.

On the TLTRO3.2 that was released earlier today, with lower volume than we anticipated (banks took only EUR97.7bn), Lagarde was not worried, but mentioned that later operations may also be used (an argument we also discussed in our TLTRO3.2 review, ECB Research, 12 December).

ECB acknowledges rays of light for the economy

The new staff forecasts presented a more upbeat picture about the economy and inflation outlook than in September, as the clouds over the euro area macro outlook have started to lift. Lagarde stressed initial signs of stabilisation in economic momentum and a mild increase in underlying inflation, and that while risks to the growth outlook were still seen as on the downside, they have become less pronounced. This could pave the way for a balanced growth risk assessment at the January or March meeting, depending on the outcome of the UK election / Brexit and the US-China trade war.

Changes to the forecasts were relatively small in size (see table) and as expected the new 2022 forecasts showed HICP inflation as ‘close to but below 2%’ (at 1.7% by Q4 22) and growth returning to potential. The ECB’s core inflation confidence remains alive with core seen converging to 1.5% in 2021.

As discussed in Measuring the euro area inflation pulse, 29 November, we remain more downbeat about a material pick up in core inflation, foreseeing it only at 1.1% in 2020 and 2021. The subdued outlook for goods price inflation in particular is rendering the ECB inflation target as elusive as ever in our view. Similarly, the ECB’s growth outlook remains on the optimistic side in our view, as we think the impact of the ECB’s easing measures on the real economy will be relatively limited in the current environment (see Euro area – Struggling to escape the ‘low for longer’ curse, 10 December). 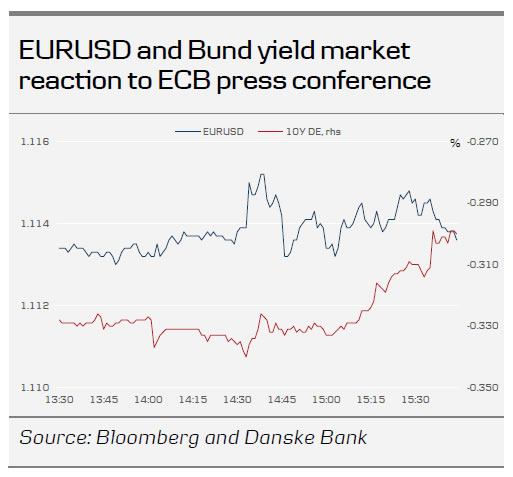 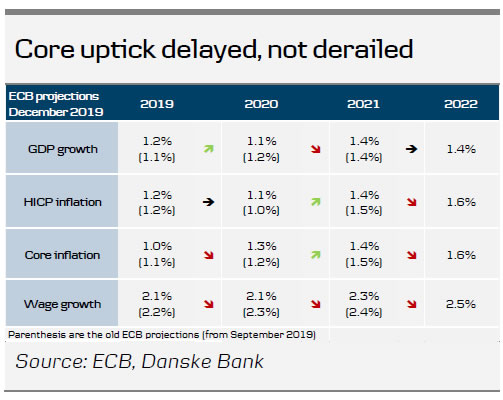 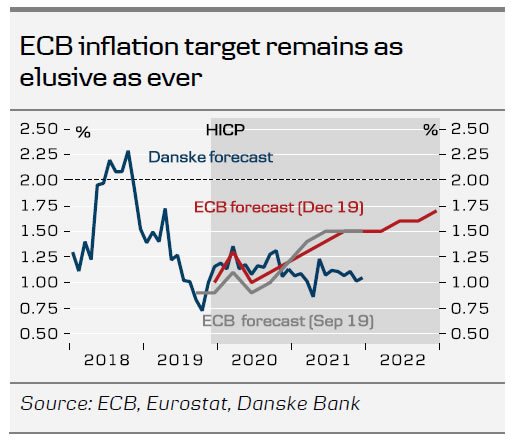