Housing starts lost a bit of steam toward the end of last year, slipping to an annualized pace of 201,000 in Q4/19 from a rate closer to 220,000 in the prior two quarters. We think starts will settle in the middle of that range in 2020, not far from the 209,000 pace seen in 2019. That would be consistent with a resurgent housing market—which we see extending into this year—and strong demographics (Canada’s population now growing at its fastest rate since the early-90s). Also, with building permits still running faster than the pace of starts (and having done so for more than a year) we think there is scope for the latter to improve early this year.

While today’s data fell short of consensus, we don’t think it does much to dent the narrative that Canada’s housing market has shifted from a drag on growth to providing moderate support. As such, the starts numbers are likely to be overshadowed by Governor Poloz’s comments later today, December jobs numbers tomorrow, and the BoC’s Business Outlook Survey on Monday. All three will be key in shaping the odds of a rate cut this year. 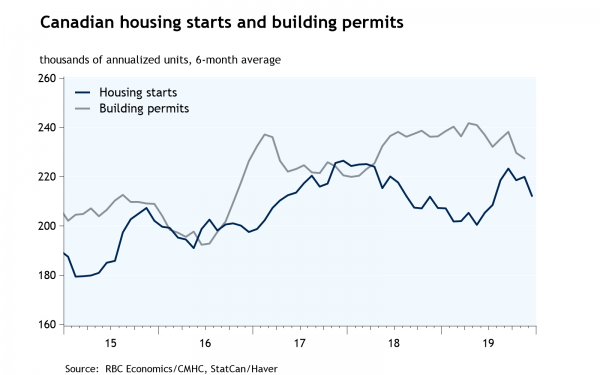 Canadian Employment Up Another 419k in July