Monday July 10: Five things the markets are talking about

To date, rising interest rates continue to overshadow geopolitical developments and it’s the Bank of Canada (BoC) turn this week to practice what G7 Central Banks have been preaching of late.

Over the past fortnight, markets have reassessed the outlook for tighter monetary policies from major central banks following a string of hawkish remarks.

Given the good economic news recently in Canada, Governor Poloz is expected to increase its policy interest rate by +25 bps points to +0.75% on Wednesday (10:00 am EDT). At the same time the Bank will publish its Monetary Policy Report with its current forecasts.

However, if they disappoint it will get very messy again for the loonie (C$1,2910) – over the last month, the CAD’s painful rise has taken the ‘bears’ by surprise.

Note: The last time the BoC changed rates was two years ago when it lowered its policy rate by -25 bps.

Friday’s solid U.S employment growth without inflation should keeps the Fed normalizing policy at a ‘slow’ pace, which is positive for equities, mixed for the dollar and yields.

Also on Wednesday, capital markets will look to the Fed’s Janet Yellen’s testimony before Congress for guidance on when the Fed could start reducing its balance sheet.

In mainland China, stock indexes were little changed as investors awaited fresh catalysts ahead of a plethora of data due next week.

Overnight, markets shrugged off China’s June inflation data, which met expectations and did little to alter the view that economic growth is cooling after a solid Q1 – June CPI rallied +1.5% y/y.

In Europe, markets have opened higher and continue to remain positive, as risk sentiment has improved over the weekend. Consumer discretionary sector lead the gains, while energy stocks again weigh on indexes. 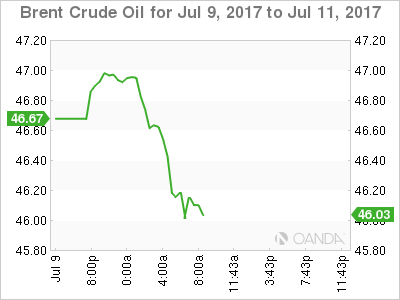 2. Oil edges up but market still under pressure

Last week, crude oil prices rolled over mid-week giving back half of gains seen since June 21.

Nevertheless, oil prices have recovered some losses overnight after its -3% fall Friday, but markets remain under pressure from high drilling activity in the U.S and ample supplies from OPEC.

The dynamics have not changed for oil; speculators are predominately booking some profits.

Note: Brent prices are -17% below their 2017 opening despite a deal OPEC to cut production from January.

On Friday Baker Hughes data showed that U.S energy firms added +7 oil drilling rigs last week, marking a 24th week of increases out of the last 25 and bringing the total count up to +763, the most since April 2015.

Gold is little changed overnight (-0.3% to +$1,207.88 an ounce) hovering atop of its four-month lows after stronger than expected U.S jobs data indicated that the Fed would maintain its stance on monetary tightening. On Friday, the yellow metal fell to its lowest print since March 15 and -2.3% on the week. 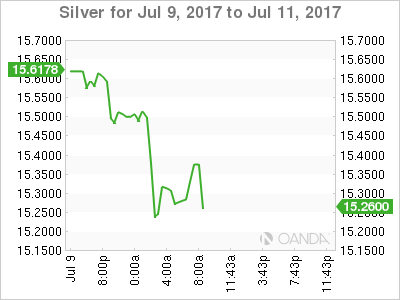 Recent moves in the fixed income market are not for the faint hearted.

The U.S 10-year yield (+2.385%) has climbed nearly +25 bps from its 2017 low at the end of last month as investors brace for the possibility that the ECB will begins to withdraw its bond-buying stimulus.

With European economic data continuing to surpass expectations has resulted in the German 10-year Bund yield moving back above the psychological +0.5% level not seen since early last year.

Current consensus expects the 10-year yield to rise to +2.66% by year-end, +0.45% above where it was trading at the beginning of June. 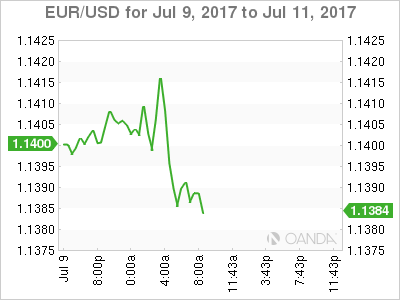 Over the last week, the EUR (€1.1383) has moved to a one-month high outright, while GBP (£1.2863, €0.8848) has suffered after U.K economic releases significantly lagged that of continental Europe’s. The ‘big’ dollar has also rallied to the highest level since early May against the Yen (¥114.20) – supported by the BoJ’s actions Friday who were forced to offer an unlimited amount of bids in its fixed-rate bond operation to stem the rise in JGB bond yields.

Where to from here? Further gains for EUR may be tough, there seems to be few near-term catalysts to build on this recent rally, while the recent weak U.K data makes an interest-rate rise by the BoE unlikely for now, leaving sterling vulnerable to further declines – especially against the dollar. 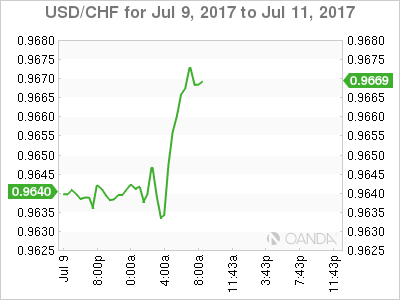 The latest sight deposits data from the Swiss National Bank (SNB) suggests the bank largely refrained from intervening in currency markets last week, as the EUR (€1.0998) flirts with one-year highs against the franc.

Sight deposits – considered a proxy for intervention – were +578.7B CHF, little changed from the previous week. 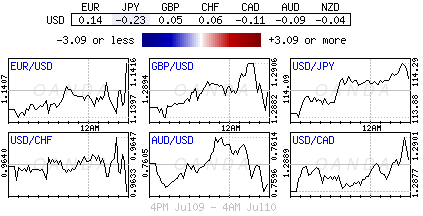