If all goes according to the FOMC’s plan, its January meeting will be considered a snooze. Consistent with the consensus, we expect the FOMC will keep interest rates on hold. Not only has the FOMC signaled it is comfortable with its current policy stance, but risks to the outlook have subsided, on balance, while recent economic data have been consistent with the Fed’s outlook.

We will be watching closely for any guidance on how the Fed’s response to recent funding pressure may change. The committee may decide to raise the interest rate that the Fed pays commercial banks on the excess reserves they hold at the Fed (i.e., IOER) to push the effective fed funds rate back toward the middle of the target range. That said, we view any increase in IOER, whether at this meeting or at subsequent meetings, as only a technical adjustment and not an indication of future policy changes. Meanwhile, there will be a new crop of voters as part of the regional Federal Reserve Banks’ regular rotation, but we do not believe the new composition changes the policy outlook.

Our view that the FOMC will keep rates unchanged at the January meeting stems from both the guidance in recent communications and recent data. Following its last meeting in December, the committee stated that the policy rate was “appropriate,” a sentiment that has since been echoed in inter-meeting speeches and interviews. Even the FOMC’s most dovish member, Neel Kashkari, who is a voting member of the FOMC this year, has said he is comfortable with the current stance of monetary policy.

While risks to the outlook including trade policy, geopolitics and weak global growth remain elevated, they have subsided to some extent, with the exception of geopolitics, since the FOMC’s last meeting. The United States and China signed Phase I of a trade deal on January 15, reducing the risk of further escalation in the trade war and taking some uncertainty off the table. Even with heightened tensions in the Middle East in recent weeks, oil prices are well within the past year’s range and are far from posing a threat to real consumer spending (Figure 1). Global growth remains subdued, but PMIs continue to hint that activity is stabilizing. 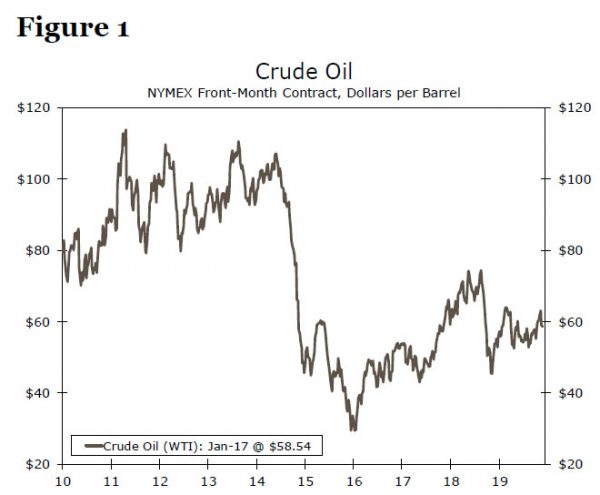 Recent readings on the U.S. economy have also indicated little need to change course. Hiring continues to be strong on trend and the unemployment rate remains at a 50-year low. Inflation is still struggling to meet the Fed’s target, however (Figure 2). With households’ inflation expectations near all-time lows and wage growth softening over the past year, most committee members do not seem compelled to take back last year’s 75 bps of rate cuts even as risks to growth have ebbed. 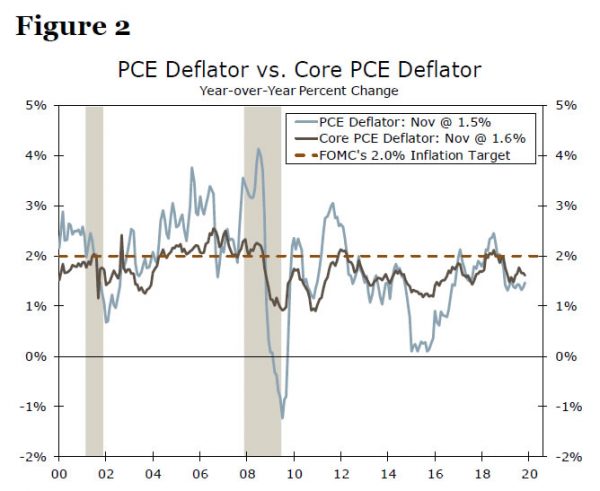 Financial markets seem to be on board with the FOMC standing pat for the time being. Equity markets are at record highs, credit spreads are near the tightest levels this cycle and financial conditions broadly are the easiest in about six months. Currently, markets are pricing in no chance of a rate cut at next week’s meeting.

Where It May Get More Interesting: Repo Ops, Balance Sheet and IOER

More up in the air will be any adjustments to the Fed’s efforts to relieve funding pressures in repo markets. The additional liquidity provided to markets via the Fed’s monthly Treasury bill purchases, which began in October and are scheduled to continue through April, and its term and overnight repo operations led to a quiet year-end in funding markets. But the Fed has indicated it is not ready to step away from markets just yet and will continue its term and overnight repo operations at their current levels through the end of the month. In February, the Fed plans to reduce the size of its term repo operations only modestly (to $30B from $35B). We continue to expect that the Fed will announce a standing repo facility at some point, but that next week’s meeting may still be a bit early to have worked out the technical details.

Asset purchases also look set to continue at the current pace of $60B per month, although there could be some discussion about shifting the composition of the purchases toward short-dated Treasury notes and bonds. The Fed has noted that its bill purchases thus far have had “little discernible effect on market functioning.” But if its purchases were to eventually sop up too much of the T-bill market (Figure 3), then market liquidity could be adversely affected. Unlike its quantitative easing (QE) program of a few years ago, the Fed probably does not want to move too far out the curve today. The rationale for QE at that time was to pull down long-term interest rates to stimulate the economy when it was depressed. The Fed needs to increase bank reserves today, but it does not need to stimulate the economy further, hence the focus on purchases of short-dated Treasury securities today. 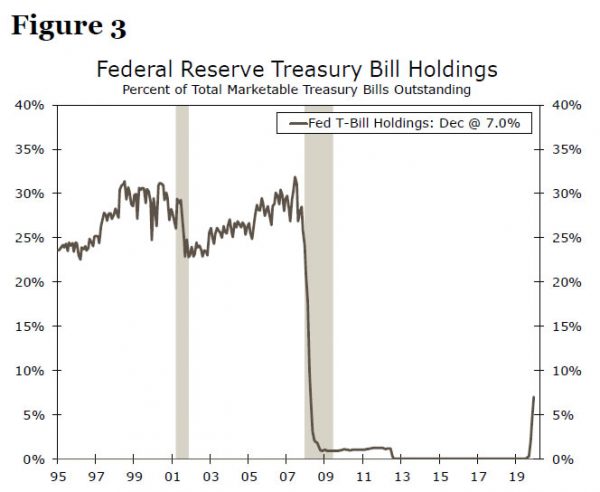 A tweak to IOER, however, could come as soon as next week’s meeting. The effective fed funds rate currently stands at 1.54%, with a historically large deviation from the midpoint of the target range of 8.5 bps (Figure 4). In prior periods where the effective rate was well off the midpoint, the FOMC adjusted IOER to steer the fed funds rate back toward the center of the target range. Although raising IOER may seem at odds with the Fed’s efforts to increase liquidity in the financial system, the move could be seen as a signal of the Fed beginning to return to “normal.”2 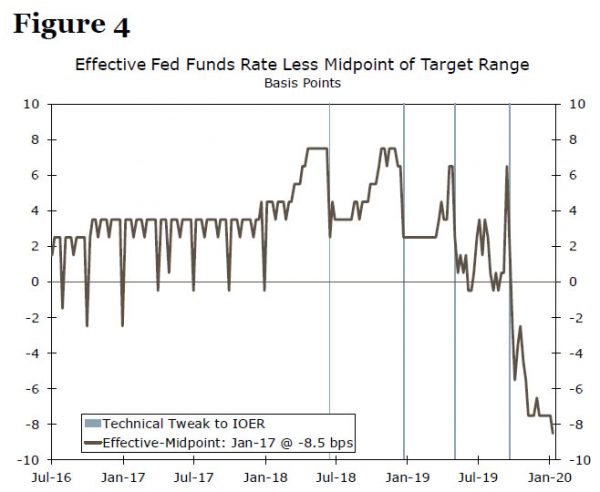 Markets appear to have largely priced in a 5 bps increase in the IOER rate following some discussion of an increase at the FOMC’s December meeting and the large gap between the effective fed funds rate and targeted midpoint at present. As has been the case with prior tweaks to IOER, we would not view this is as foreshadowing future changes to the Fed’s policy path. Instead, it should be viewed as merely a technical adjustment meant to align the fed funds rate with the current policy range.

New Birds in the Nest Unlikely to Change Policy Path

The first meeting of the year means that there will also be new voting members as part of the FOMC’s regular rotation of regional presidents. Rotating off as voting members will be two “hawks” –Eric Rosengren (Boston) and Esther George (Kansas City). The committee is also losing two “doves,” however, in Charles Evans (Chicago) and James Bullard (St. Louis).

On balance, the new crop of voters looks to be slightly more hawkish. Loretta Mester (Cleveland) and Patrick Harker (Philadelphia) tend to be on the “hawkish” end of the spectrum, although neither dissented in their last steads as voters, albeit then the Fed was raising rates (Mester in 2018 and Harker in 2017). Neel Kashkari, probably the most “dovish” member of the FOMC, will also be a voter this year, but the fourth new voter, Robert Kaplan (Dallas) tends to be fairly middle-of-the-road in his policy views.

It is worth noting that the regional Fed presidents who rotate on and off as voters account for only four of the ten votes that are currently cast at each meeting.3 In other words, they remain a minority and are unlikely to sway the final vote outcome. Moreover, all of the regional Fed presidents are always part of FOMC discussions, giving them the chance to influence the direction of policy even if they are not currently voters. We therefore do not see the makeup of voters in 2020 as a significant factor in our outlook for FOMC policy this year, and we continue to expect the FOMC to remain on hold not just at its January meeting, but for the foreseeable future.

1 The “blackout period” is the ten days prior to a FOMC meeting during which Fed officials refrain from making public comments about the economy.

2 An increase in IOER incentivizes banks to keep their excess reserves parked at the Fed rather than lend them in the fed funds market, everything else equal. A reduced supply of fed funds would cause the fed funds rate to rise bank toward the middle of the target range.

3 Governors vote at every meeting, and currently five of the seven Governor positions are filled. The New York Fed president and Vice Chair of the FOMC (currently John Williams) is a permanent voting member.