The Federal Reserve is almost certain to keep interest rates unchanged when it wraps up its policy meeting on Wednesday at 19:00 GMT. If there is any change in tone from Chairman Powell and his colleagues, it might be towards a more cautious narrative, which could weigh on the dollar a little. That said, the currency’s overall outlook still seems positive, for a lack of alternatives. US GDP growth data for Q4 are also due out on Thursday, at 13:30 GMT.

The US economy remains in good shape overall. Growth continues to run at a healthy clip around 2%, supported by strong consumption, and the housing market is also picking up steam again, fueled by the Fed’s rate cuts last year. Separately, trade risks seem to have taken a back seat for the time being, following the ‘phase one’ US-China deal.

Alas, while the overall economy is doing fine, there have also been some warnings signs. For instance, the manufacturing sector continues to contract according to the latest ISM survey, while inflation as measured by the core PCE price index remains muted. Meanwhile, there have been signs of stress in the labor market lately. Real wage growth slowed substantially, and job openings seem to be trending lower – an early indication that employment growth may be set to slow down.

And while trade concerns have dissipated for now, those have likely been replaced by coronavirus worries, as investors are still scrambling to figure out the impact this virus will have on the global economy. Although monetary policy cannot react to every virus outbreak, this might still be a concern for the Fed, given the potential spillover effects if Chinese economic growth takes a serious hit.

No action, but perhaps a more dovish take

Turning to this week’s meeting, there’s virtually no chance of a rate cut and since this is one of the gatherings without updated economic forecasts either, the market reaction will depend mainly on Chairman Powell’s remarks during the subsequent press conference at 19:30 GMT. 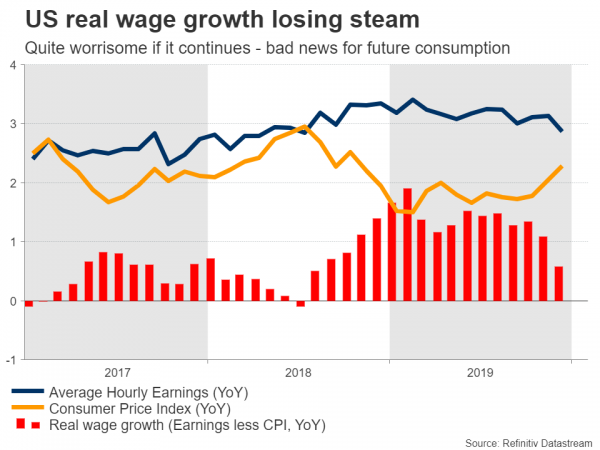 If there is any change in tone from Powell, it may be towards a more dovish narrative. Not only has the data pulse slowed lately, and trade risks have been replaced by virus risks, but there’s also the rotation in the FOMC’s voting composition to consider.

The Federal Open Markets Committee (FOMC) changes voting members each year, and the new voting composition for 2020 seems more dovish than last year. Hawks like Esther George and Eric Rosengren – who opposed all three rate cuts last year – are now losing their voting rights and will be replaced by more moderate officials.

Dollar may tumble on Fed, but outlook still positive

If policymakers do adopt a more concerned tone, and for instance highlight that they are monitoring the softness in the data and global risks, that would argue for a negative reaction in the dollar as investors price in a higher probability for a near-term rate cut.

Even in that case though, the overall picture for the greenback still seems positive, and any setback may remain relatively short lived. The argument is that there’s no real alternative to the dollar right now – which offers a special combination of safety and high interest rates, compared to its major FX peers like the euro or yen.

Unless the Fed starts cutting rates aggressively and erodes the dollar’s rate advantage, or the Eurozone announces a big fiscal spending package to boost the struggling euro area (and therefore the euro), it’s difficult to envision any real downside in the greenback. Neither seems likely, over the coming months at least.

Crucial economic data are also on tap, with the first estimate of GDP for Q4 expected to show that the economy grew at the same pace as in Q3, specifically by a 2.1% annualized rate. If met, that would signal the American economy continues to easily outgrow its major competitors.

On Friday, the focus will turn to the core PCE price index for December, alongside personal income and consumption data for the same month.

Looking at euro/dollar technically, it the Fed strikes a worried tone, the pair could edge higher and challenge the 1.1040 zone initially.

On the other hand, if policymakers don’t appear concerned at all, the 1.0990 level might be broken to the downside, turning the focus to the 1.0940 region next.