The outbreak of COVID-19 is the biggest crisis Europe has had to face since the second world war as the human and economic tolls reach levels that were inconceivable just a few weeks ago. Yet, while the euro hasn’t done particularly well during these dark times, it is far from being at the bottom of the performers league. But does the current exchange rate reflect investor confidence in the European Union’s handling of the outbreak or that it was undervalued to begin with?

The euro initially surged against the US dollar when the virus fallout started escalating in mid-February, leading many market commentators to ask whether the greenback had lost its safe haven status. But it soon became apparent that the moves were driven by the unwinding of carry trades as expectations that the Federal Reserve will soon slash interest rates to zero sparked a reallocation of assets out of the United States.

Up until recently, the euro had been a popular currency for carry trades as investors borrowed cheaply in the Eurozone where rates are negative to buy higher yielding assets such as US Treasuries. However, after the Fed’s emergency rate cuts, the dollar lost its yield advantage and so some outflows were to be expected. 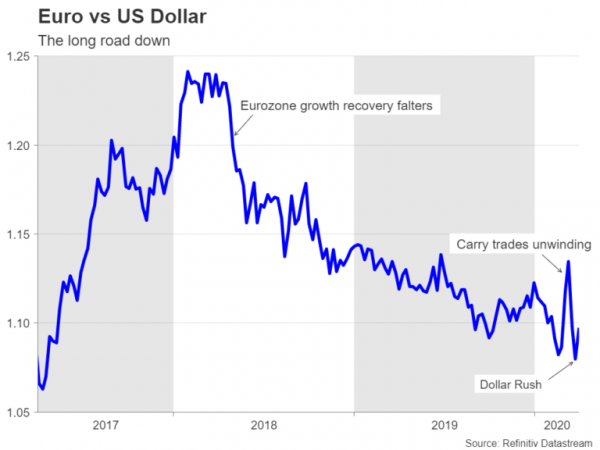 Euro trounced by rush for cash

But the erratic moves didn’t end there. Soon after soaring to a 13-month top of $1.1492, the euro took a tumble, plunging to a 3-year trough of $1.0635, as the growing market panic over the virus triggered dollar shortages amid a sudden rush for cash. With those one-off flows having settled down, it’s back to fundamentals for euro/dollar. The pair is currently hovering around $1.0925, a frequently tested support region from September 2019.

But where does the euro go from here? The Eurozone economy entered this crisis at a time when growth was already flagging, while the US economy was in robust shape. Nevertheless, US lawmakers have drawn up a much bigger fiscal package relative to GDP than their EU counterparts, despite European health care systems coming under more severe strain and businesses having to survive under tougher restrictions. On the monetary policy front too, the Fed has gone much further than the European Central Bank by pledging unlimited bond purchases. 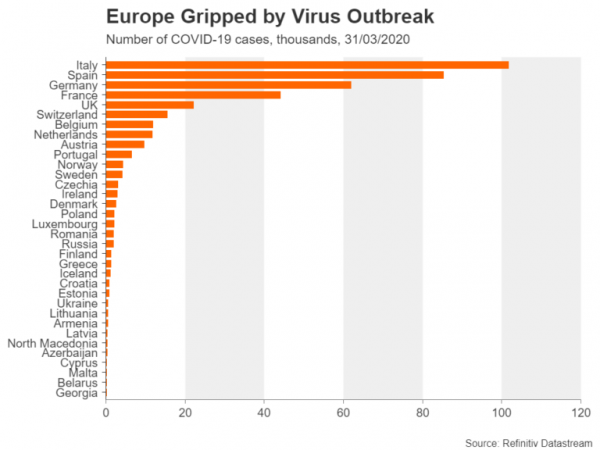 The only way is down

So on the face of it, the only way appears to be down for the single currency as it would be difficult to imagine it bucking it’s long-term downtrend against the current backdrop. However, with the dollar’s relative yield advantage being wiped out and the euro already considered too cheap, the scope for further downside in euro/dollar may not be as considerable as it used to be.

That’s assuming, though, that markets behave in an orderly manner where the Eurozone’s current account surplus and the safety of German government bunds are able to curb an aggressive selloff like that experienced by the pound recently. But with investors still in panic mode and potentially more losses to come in stock markets, the likelihood of another wave of dollar buying remains high, and that probably is the biggest risk for the euro in the present climate.

Should a dollar liquidity squeeze strike again, the euro could soon be revisiting the February and March lows at $1.0775 and $1.0635, respectively. A breach of these lows would clear the way for the January 2017 trough of $1.0339, which would have to be broken before traders contemplate a push towards parity.

In the absence of any further intensification in market stress, euro/dollar is more likely to seek a bottom nearer the $1.08 level and would also be susceptible to upside moves, specifically on news of fresh fiscal stimulus being announced by Eurozone governments.

Can the EU step up?

The direct fiscal measures announced by Eurozone countries to date are currently in the range of 1-2% of GDP. They are dwarfed by America’s stimulus of 6% of GDP. Although there are high hopes that EU aid could soon be made available for member states as Eurozone finance ministers (Eurogroup) are mooting the use of the European Stability Mechanism (ESM) to release additional funds.

What would really impress the markets, however, would be for the Eurogroup to agree on mutualized debt issuance. The idea of issuing euro-denominated common bonds to share the debt burden has been around since the 2008-9 financial crisis. It was rejected then and again during the Eurozone debt crisis and continues to be opposed by fiscally conservative countries such as Germany and the Netherlands.

Are coronabonds in the offing?

However, there have been some indications lately of the usual adversaries showing some openness to the idea of Eurobonds, or coronabonds as they have been dubbed. Realistically, though, coronabonds are unlikely to get the go ahead unless things were to get much worse for crisis-hit Europe. There is the possibility that countries like France, Italy and Spain that are in in favour of coronabonds may decide to launch them without full EU support, but the bonds probably wouldn’t have the same credit worthiness if not backed by the bloc’s powerhouse, Germany.

Whatever form EU-level help takes, any additional spending leeway for paralysed European economies would go a long way in easing their pain through the crisis. That in turn could put the euro back within the $1.12-$1.14 range in the short term. In the longer term, however, euro/dollar’s performance will depend mostly on the success of existing policies and the speed of the recovery relative to the US.