No New Measures, But Fed Support Not Going Away Any Time Soon

The Fed made no policy changes today, having opted to announce new support measures as needed in the last two months to address the rapidly-evolving economic and financial fallout of the COVID-19 pandemic. That has included reducing the fed funds rate to its effective lower bound, significantly ramping up Treasury and mortgage-backed securities purchases, providing liquidity via overnight lending and term repos, and a host of other programs that leverage the Fed’s emergency lending powers in an effort to improve the flow of credit to a range of borrowers. Those programs have already swelled the Fed’s balance sheet to more than 30% of GDP and that figure will only increase in the near-term as recently-announced initiatives are launched and/or ramp up. That support can also be scaled up if necessary—Chair Powell noted that the central bank’s credit programs are not subject to a dollar limit. For now, though, the Fed sees its stance as appropriate and is “waiting to see more from the economy” before adjusting its policies.

The Fed hasn’t provided any economic projections though Chair Powell noted economic activity will drop at an “unprecedented rate” in the current quarter (following an already substantial 4.8% annualized decline in Q1). On the recovery, he said activity will pick up as re-opening begins but that it will take some time for unemployment to return to more normal levels. Similarly, the policy statement noted that the COVID-19 crisis is not just weighing on near-term economic activity but also “poses considerable risks to the economic outlook over the medium term.” While Powell didn’t sound overly concerned about deflation, lower energy prices in the near-term and weak demand in the medium term will likely make hitting the Fed’s 2% inflation objective an ongoing challenge. Certainly by the end of this year, and even by the end of 2021, it looks like the Fed will be a ways from meeting its dual mandate of maximum employment and stable inflation. We expect a sizable Fed balance sheet and low interest rates will remain in place through the end of next year. 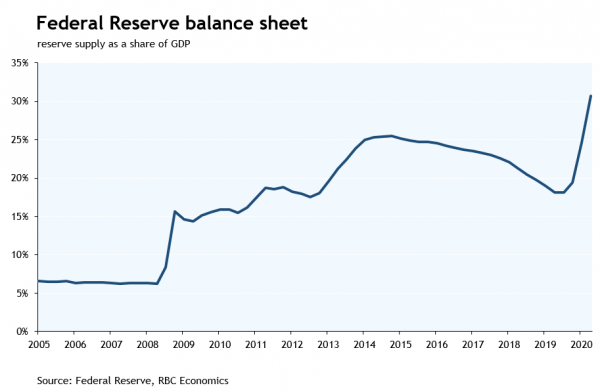