The USD weakened against a number of its counterparts yesterday as the market displayed an improved and more optimistic sentiment. Media reported that there were encouraging results from the trial of a vaccine for COVID-19, by a US pharmaceutical company, however we still consider the situation as fragile, as it is not the first-time progress for a medicine was reported. Commodity currencies such as the AUD tended to get a further boost and especially the CAD which benefited also from rising oil prices. It would be characteristic that against JPY and the CHF the USD showed little change as these currencies may have also suffered safe haven outflows. The market’s attention is now turning to Fed Chair Powell’s testimony before the Senate today as well as US Treasury Secretary Mnuchin. It should be noted that in recent statements the Fed’s Chair striked a more optimistic tone, as he stated that GDP shrinking could be steep, yet he does not see the economy entering another depression and that the country will get to “an even better place” than it was before. Should the same optimism be expressed in his testimony tonight, we could see USD slipping further as safe haven outflows may be present once again. USD/CAD tumbled yesterday breaking consecutively the 1.4050 (R2) and the 1.3970 (R2) support lines, both now turned to resistance. As the pair broke the upward trendline incepted since the 11th of May, we initially switch our bullish outlook for the pair in favor of a sideways movement, yet we suspect that the bears may have not said their final word just yet, despite the slight correction during today’s Asian session. If the bears maintain control over the pair, it could break the 1.3865 (S1) line and aim for the 1.3755 (S2) level. In a buying momentum, we could see USD/CAD breaking the 1.3970 (R1) line and aim for the 1.4050 (R2) hurdle.

The common currency jumped yesterday against the CHF, GBP and the USD, due to a common German Franco proposal for a €500 Billion recovery fund for Europe and proposed that the European Commission would be allowed to borrow money to finance it. The program is to offer grants to sectors and regions most affected by the pandemic and be repaid by the EU budget in the long term. Please note that the recovery fund would come on top of the three initiatives which Eurogroup finance ministers already agreed to on 9 April. The proposal has still to be approved by all member states yet may still serve as the basis for a joint fiscal response of the EU. We must note that ECB’s de Guindo’s comments last week, of the Eurozone allready being past its low point for the current economic crisis and may be on the rebound, still echo in our ears and today’s ZEW economic indicators from Germany, may be the first test. EUR/USD rallied yesterday, breaking consecutively the 1.0835 (S1) and the 1.0890 (S2) resistance levels, both now turned to support. As today’s financial releases are expected to favor the EUR and weaken the USD, we could see the rise of the pair continuing. Should the pair’s long positions actually be favored by the market we could see EUR/USD breaking the 1.0950 (R1) line and aim for the 1.1010 (R2) barrier. If a selling interest of the market dominates the pair, it could break the 1.0890 (S1) line and aim for the 1.0835 (S2) level.

Today during the European session we get UK’s employment data for March and Germany’s ZEW economic indicators for May. In the American session, we get the number of US building permits and house starts for April while just before the Asian session starts, we get the API weekly crude oil inventories figure. During Wednesday’s Asian session, we get Japan’s machinery orders growth rate for March. As for speakers, besides Jerome Powell’s and Mnuchin’s testimony before US lawmakers also ECB’s Luis de Guindos, Minneapolis Fed President Kashkari, ECBs Philip Lane and Boston Fed President Rosengren are scheduled to speak today. 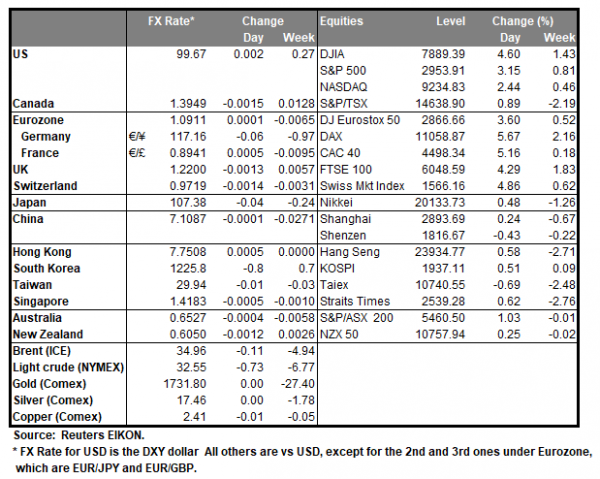 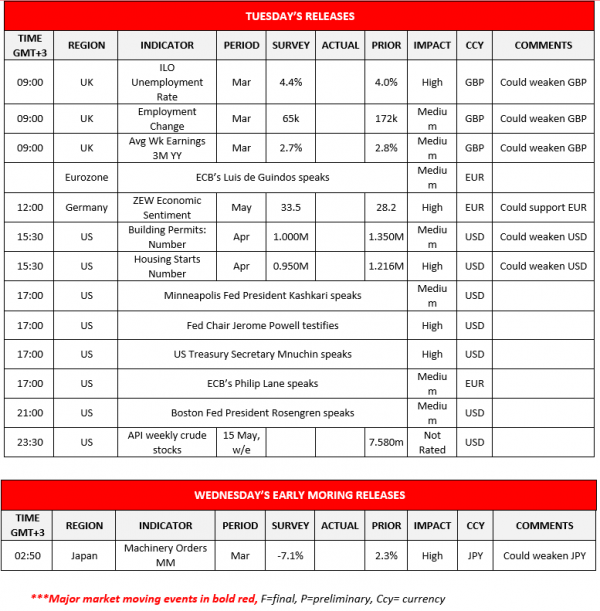