The headline GDP drop in April was close to Statistics Canada’s 11% preliminary estimate at the time of the March report. The drop was still entirely unprecedented – adding in the 7.5% pullback in March, the 18% 2-month decline was 4 times the peak-to-trough fall over 8 months in the 2008/09 financial crisis.

All industry-groups posted declines in April as a full month of virus containment measures took its toll. Manufacturing and construction output both fell more than 20%, as did retail trade. Health care and social assistance fell another 10%, education output fell 9%. Still, the largest 2-month declines were, unsurprisingly, in accommodation & food services and arts, entertainment and recreation which fell 64% and 56%, respectively, over March and April combined.

And as bad as the April output numbers looked, the recovery began in May. Statistics Canada estimated that GDP increased 3% in May. That would retrace less than 15% of the March/April declines, but containment measures have continued to ease and early reports on June have looked significantly less-bad (including our own tracking of credit card purchases.) Q2 GDP will still be unprecedentedly bad as a whole, and re-escalation of virus spread in regions south of the border have raised obvious concerns about the impact of easing physical distancing measures too quickly. But virus spread in Canada has remained more contained and early economic numbers for May and June still look a little less-bad than most were expecting even a month ago. 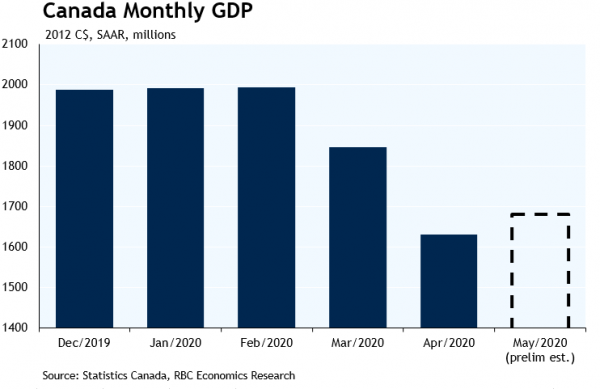 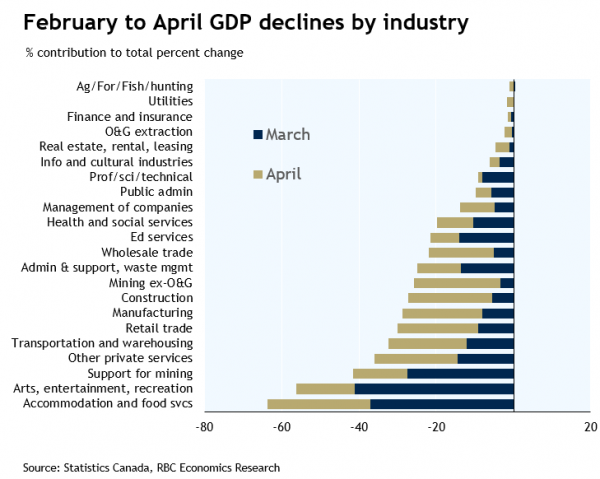