The bounce-backs in exports (+17.1%) and imports (+21.8%) in June were both somewhat stronger-than-expected but both measures were still down sharply relative to pre-shock levels. Imports were still 14.3% below February levels, and exports -17.9% over that period.

The June increase in trade flows was led by 200%+ increases in both exports and imports of motor vehicles and parts, although that still left both sharply below February levels. But increases were posted in most sub-categories, both on the import and export side. Imports of equipment were also still sharply below pre-pandemic levels, but ticked up significantly (industrial machinery and equipment import volumes up 9.5% in June) in a sign that some domestic business investment is re-starting.

The big go-forward risk remains that re-escalation of virus spread in the United States will prompt renewed shutdowns and weigh on Canadian trade flows once again as a result. But at this point it still looks more likely that the resurgence will stunt the pace of near-term growth south of the border than to re-test the exceptionally low levels of activity in Q2. Canadian household spending on goods and homes were both back above year-ago levels in June already. But activity in the services-side of the economy will take longer to recover and investment activity in the oil & gas sector still looks very soft. The near-term economic bounce-back in the third quarter is still likely to be sizable in Canada with containment measures significantly eased. But we continue to expect further gains will be decidedly slower moving. The economy will still very likely be running sharply below long-run capacity, and unemployment still elevated, at the end of this year. 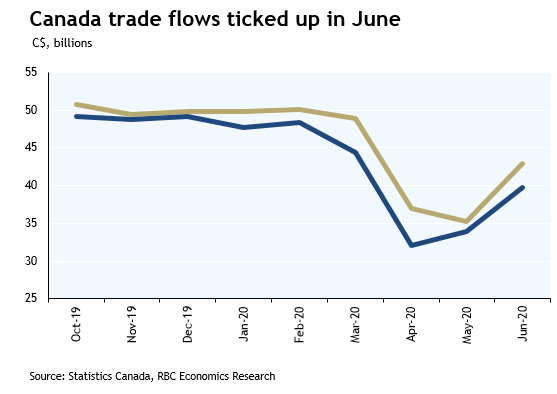