The USD weakened against some of its counterparts yesterday as hopes for a quick fiscal stimulus for the US economy tended to retreat. The negotiations in the US Congress between Democrats and Republicans seem to have hit a halt as the White House tends to accuse the Democrats of not wanting to negotiate the package. It should be noted that officials of the Democratic party stated that they had proposed of finding a solution midway, yet the Republicans refused insisting on a lower amount. The amount proposed by the Democrats is around US$3.4 trillion, while the Republicans aim at the far lower amount of US$1.0 trillion. We expect the two sides to ultimately come to an agreement as political pressure is on the rise, yet the uncertainty regarding the actual amount and the timing of when the package is to be delivered seems to test the nerves of the market. Market sentiment seems to be swinging between optimism and pessimism yet should there be any indications of the two sides nearing a deal, the USD could have substantial gains and vice versa. USD/CHF dropped yesterday, however hit a halt and stabilised at the 0.9105 (S1) support line. For our current bias in favour of a sideways motion to change, for a bearish outlook, we would require a clear breaking of the 0.9105 (S1) support line and consecutive lower troughs and peaks. Should the pair actually come under the dominance of the bears, we could see it breaking the 0.9105 (S1) support line and aim if not break the 0.9025(S2) support level. On the flip side, should the bulls take the initiative, we could see the pair recovering yesterday’s lost ground and breaking the 0.9200 (R1) line aiming for higher grounds.

Apple’s substantial Chinese US$44 billion market seems to be under threat as US President Trump is about to ban WeChat in the US. According to media, iPhone users across China are having second thoughts about the device as the ban seems to apply also for iPhone’s app store. Analysts expect that should Apple be forced to remove the service from its app stores, shipments to China could be reduced by 25% to 30% while other products may also suffer a hit. At the same time rumours across the market seem to suggest that Apple is about to launch iPhone 12 in October, while the iPad and Apple watch are expected in the usual September timeframe. The news came as the company prepares for the 5th share split in its history, announced for the 24th of August and to come into effect on the 31st of the month. If there are further headlines confirming that Apple will have to remove the Chinese apps from its app store, we could see its share price decline. AAPL maintained a sideways motion between the 435 (S1) line and the 457 (R1) level. We tend to maintain the bias for the sideways motion as long as the two prementioned boundaries remain intact. Note though that the RSI indicator below our 4 hour chart seems to be implying the presence of the bulls as the indicator approaches the reading of 70, yet still allows for further advancement. On the other hand, it should be noted that the share’s price is at the highest levels since 2014, which may be cause buyers to hesitate. Should the share find fresh buying orders we could see it breaking the 457 (R1) resistance line and aim for the 481 (R2) resistance level. Should a selling interest be displayed, we could see the share’s price breaking the 435 (S1) support line and aim for the 418 (S2) support level.

On a slow Thursday, in the European session, we get Germany’s final HICP rate for July as well as from the Czech Republic the CPI rate also for July. In the American session, the release of the US initial jobless claims figure for the past week stands out, while Atlanta Fed President Bostic is scheduled to speak. During tomorrow’s Asian session, we get New Zealand’s manufacturing PMI for July, yet most of the interest for Aussie traders may be with the release of China’s industrial output growth rate, as well as the retail sales growth rate for the same month. Also note that RBA’s Governor Lowe is scheduled to speak. 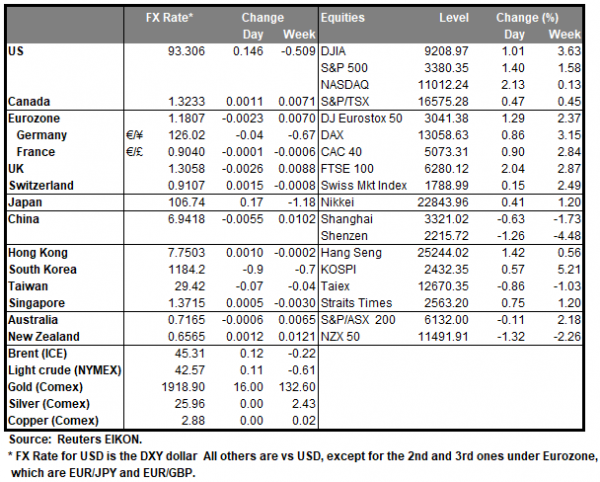 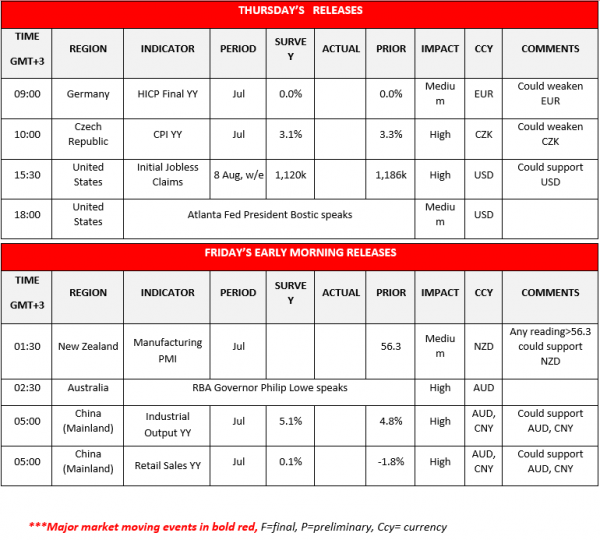