The Fed said last month that it will allow inflation to run above its 2% objective for some time without hiking rates until average inflation hits that level. While the wording of this new strategy is seen as a move to convince markets that monetary policy will remain accommodative for longer, it has at the same time raised questions about if, how, and when prices will run hot. Perhaps, influencing expectations was the Fed’s goal in the first place.

Why is inflation targeting important?

A very low rate of inflation is not always healthy for the economy as businesses cannot raise their margins, have no incentives to invest, and therefore cannot increase wages. Alternatively, a very high rate of inflation could be worse, hurting demand, creating uncertainty, and elevating unemployment as wage costs soar.

Deflation is another kettle of fish. Although consumers love declining prices, would they buy a product if they know that its price will fall in the near-term? Probably not.

For that reason, central banks have an inflation target at which policymakers want to balance the economy and keep both businesses and consumers happy.

Yet, the difficult part is to achieve it in a complex and evolving world. For more than a decade, the Fed, as well as its major counterparts elsewhere in the world, were struggling to lift inflation at 2.0% y/y only to end up with an annual rate of around 1.0% in the face of covid-19. Looking particularly at the United States, interest rates are currently at a record low of range of 0-0.25% and the asset purchase program has been extensively used, while the government has also boosted fiscal spending like there is no tomorrow. But the money is likely going to the wrong place (stocks, cash deposits) and hence may overall be less effective if consumers and businesses cannot fully utilize the stimulus because of the virus restrictions.

The power of expectations

In the absence of an effective vaccine, more needs to be done to support the economy but theoretically it seems that we are in a liquidity trap where additional rate reductions in an already low-rate environment would not boost economic growth and hence inflation.

According to economists, this ineffectiveness of policy stimulus is particularly evident when inflation expectations are negative. Investors are more interested in how much their deposits will yield in real terms, after subtracting for inflation. If nominal rates are near zero and inflation expectations are negative, then the equation will result to a positive expected real interest rate. Hence, investors would prefer to keep their money in the bank.

On the other hand, if investors have positive price projections, the equation will give a negative real interest rate, encouraging investors to spend more and consequently leading inflation higher. Perhaps this is what the Fed aimed to do last month besides ensuring a longer period of an accommodative policy, and to some degree it was successful. Average inflation expectations for the next five years, which were already on the rise since March, picked up steam the day Powell announced a more relaxed price targeting at the Jackson Hole Symposium, reaching 1.85% on September 10. Still, this is below 2.0% and the Fed must ensure that projections will keep rising in the future if it wants to get to the desired level of inflation expectations. 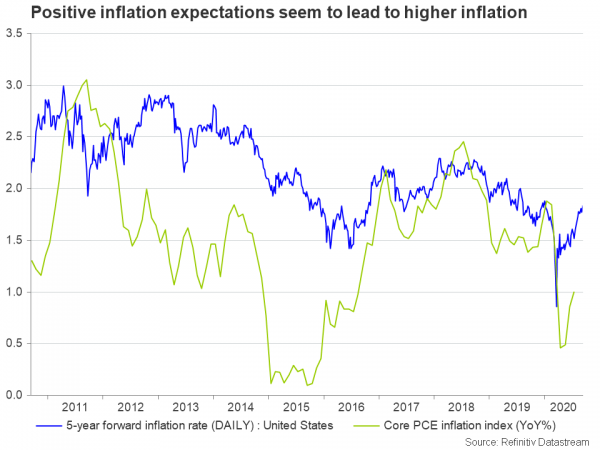 Inflation could heat up, but time matters

Now the timing that price growth can run hot may not be that simple to forecast. It may depend on when virus restrictions will be fully removed, and if that is the case, how full will households’ pockets be at that period.

Currently, a larger proportion of wages sits in the banks because consumers face barriers in spending and have an uncertain outlook for the economy at a time when money supply has gone through the roof. This is reflected by the massive expansion in the US personal savings rate which hit a record high at 33.7% of disposable income in April before it pulled back to 17.8% in July. The slowdown also coincides with the tick up in the central bank’s closely watched core PCE inflation index which climbed to 1.3% y/y in July. 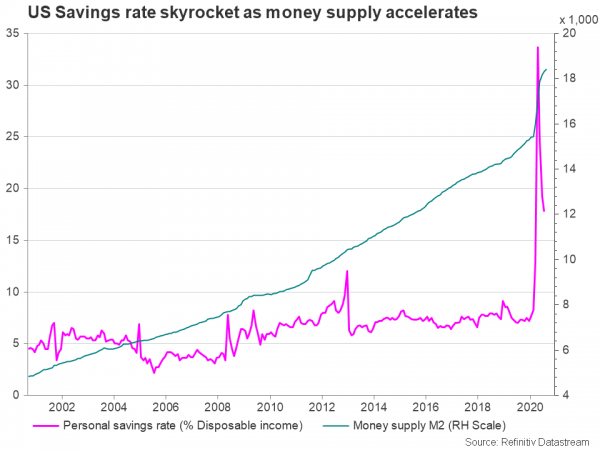 If covid-19 is beaten by a new treatment, that could free more savings to the economy and hence further boost inflation. However, if the vaccine arrives too late, when a relatively large number of businesses are bankrupt and the unemployment rate is at multi-year highs, those savings may not leave the bank accounts or could be used to cover debt payments instead and would be too weak to cause stronger inflation. 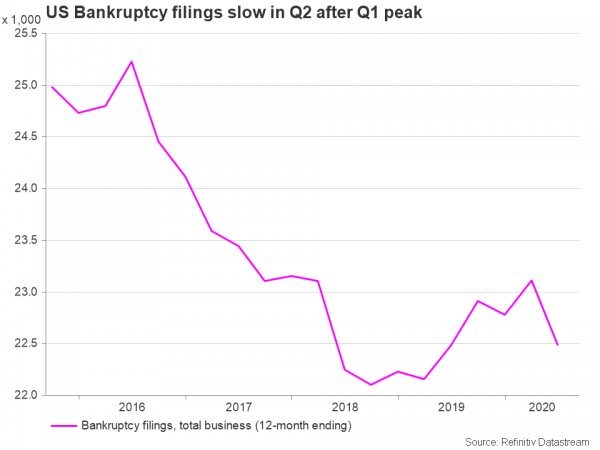 Households may also need to see wages rising before engaging in more spending, but businesses may not be willing to increase pay checks unless the government provides incentives or increases minimum wages as Biden has pledged to do if he wins November’s presidential election. Nevertheless, no matter who is in government, if stimulus keeps building up the public debt mountain, inflation could be a tool to bring it down. Deflation would just make a recovery more difficult and the servicing of debt more challenging.

As regards the market reaction, if the core PCE measure sustains its upside move and inflation expectations continue to strengthen above EU equivalents, which hover around zero, the dollar index could grab positive traction on speculation interest rates may rise faster in the US in the future.

Gold could gain as well as it is considered a hedge for inflation, while stocks could correct lower as expectations of higher rates in the future mean higher interest costs for companies.

In the meantime, the uncertain US political environment and the perception that borrowing costs may not rise anytime soon, are expected to weigh on dollar gains – unless conditions in the EU deteriorate. Note that the biggest proportion of the dollar index is made up of the euro.

From a technical perspective, the index needs to pierce a downward-sloping channel on the upside to raise buying confidence towards the 94.50 barrier. Above that, the next key obstacle could be found around 96.00.

To the downside, the area between the 20-day simple moving average (SMA) and the 92.50 support level could buffer selling pressures ahead of the 91.74 low. A break below the latter would re-activate the almost six-month old downtrend, pushing the price towards the 91.00 round level.