It wasn’t so long ago when everything was looking up for the Eurozone economy and the single currency couldn’t put a step wrong. After being ravaged in the spring by soaring deaths from COVID-19 and an economically bruising lockdown, Europe had started to get its house in order by late May. Virus cases were coming down, businesses were allowed to reopen, and European leaders demonstrated a rare show of unity when they agreed on a historic virus relief fund. But as infections begin to rise again and firms struggle to make ends meet with new restrictions, the euro could be headed for stormier waters in the impending colder months.

A euro on the retreat

The euro has been on the back foot for much of September, retreating to the $1.16 handle and trimming its year-to-date gains versus the mighty US dollar from 7% to about 4%. In reality, however, the uptrend had started to run into trouble long before the pair peaked at $1.2011 on September 1. Its Relative Strength Index (RSI) has been making lower highs since early August and there’s no sign of that negative trend indicator discontinuing anytime soon.

The loss in momentum coincides with a steady deterioration in Eurozone data and the US economy shrugging off predictions of a major hit from America’s second virus wave. But although problems are mounting in the United States too – mainly because politicians are too preoccupied with the upcoming presidential election to sit down and compromise on a new fiscal package – those risk factors have been positive for the dollar due to its safe-haven status. 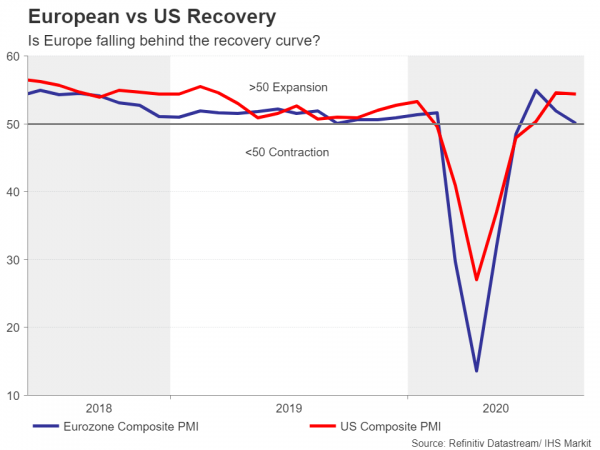 The risks surrounding the US election, the prospect of no additional fiscal stimulus, and the possibility that the virus resurgence in Europe could yet force national lockdowns are unlikely to dissipate in the next few weeks. This means the greenback will probably stay elevated at least until Election Day on November 3, making it difficult for the euro to stage a comeback before then.

Of course, the longer the euro’s consolidation lasts, the more disheartened euro bulls are likely to become. But that doesn’t appear to be the case just yet. Euro long positions have fallen only slightly from the record highs. Add to that the fact that the 10-year spread between German and US sovereign bonds has remained steady within a range since March when the Fed slashed rates to near zero, there is a strong case for the euro to resume its rally at some point in the coming months. At the very least, there is little to support a sharp bearish correction in euro/dollar. 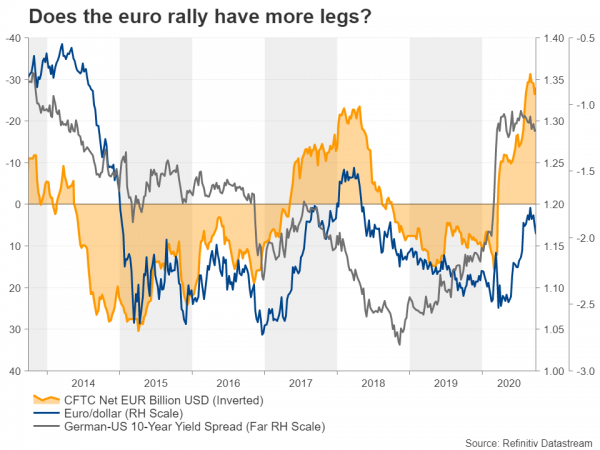 As the pair rides out this period of uncertainty, the big tests to the downside will be the 50% and 61.8% Fibonacci retracement levels of the June-September up leg at $1.1589 and $1.1489, respectively. Fending off declines beyond these key levels could be critical to how quickly the euro is able to re-establish a more bullish posture.

One important driver of sentiment for the single currency at present is the infection rate of the coronavirus in the big Eurozone economies. Daily cases of the virus continue to surge in Spain, France, Belgium and the Netherlands, although they remain under control in Germany and Italy. A levelling off in the infection rate could aid the euro regain some positive footing, whereas a further escalation of the virus is bound to compound expectations that the Eurozone recovery is about to be derailed. So far, full lockdowns are not on the cards in any of these countries, but that could change if health services become inundated with an explosion in hospitalizations. 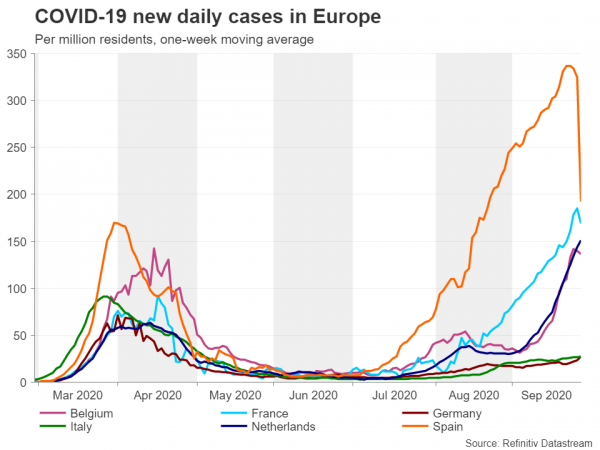 The negative impact of a faltering economic rebound on euro/dollar would be even more severe if the US recovery does not follow the same fate. But it’s not just about the comparative virus and economic data that will determine what direction euro/dollar takes as Europe’s second wave unfolds. Who wins the election in the US and perhaps more importantly, whether the election outcome will be contested, could be just as crucial for the euro as it would be for the greenback.

Is the dollar set for post-election losses?

In recent weeks, investors have sharply scaled down their assumption that a Democratic president would be bad for the economy. As things stand, markets see a greater chance of another large virus relief package being approved if Democrats occupy the White House or seize control of the Senate. A new dose of fiscal stimulus would kickstart a slowing US recovery and boost global risk appetite, though not necessarily the dollar, which would likely come under pressure from receding safe-haven flows.

If President Trump secures a second term and the Republican party maintains their grip on the Senate, post-election fiscal policy would not be as loose but there would be less of a threat of tax hikes and tighter regulation down the line. So markets might be happy either way, and the dollar could slide in either scenario as the uncertainty subsides.

A weaker dollar after the election would be just what the euro needs to generate fresh upside momentum and climb back above its short-term moving averages (MA). A bearish crossover is currently in progress between the 20- and 50-day MAs, with the $1.1780 area being the point of intersection. This is the nearest key resistance euro/dollar needs to overcome in order to eliminate the downside risks, but the bigger challenge is the $1.2011 peak that has to be surpassed if the pair is to restore its uptrend.

A US election crisis could unravel the euro rally

However, with the presidential race looking so tight and Trump hinting that he could challenge the election result in the courts if he loses, there is a growing fear that he could refuse to leave office quietly, throwing the country into a constitutional crisis. Such a prospect would be damaging for the fragile risk sentiment underscoring markets right now and the euro could find itself stuck in a consolidation phase for a protracted period.

ECB vs Fed: who will ease more?

Beyond the election, however, there is another pressing matter and that is the question of whether further monetary stimulus is forthcoming by the European Central Bank and the Federal Reserve. Both central banks will probably have to decide before the end of the year if they should ramp up their stimulus programmes. There is already some disquiet within the ECB about expanding the pandemic asset purchase programme whereas the Fed is almost certain to beef up its purchases should hopes for a US fiscal package fall down the drain.

Hence, a relatively more hawkish ECB could be what ultimately sets the single currency’s next path and it may not be too far fetched to expect euro/dollar to return to a trading range of $1.22-$1.25 in 2021.