USD/CHF has posted considerable gains on Wednesday, recovering most of the losses from Thursday. In the European session, the pair is trading at 0.9226, up 039% on the day.

There was positive news earlier on Wednesday, as the KOF Economic Barometer rose to 113.8 in September, up from 110.2 points. This marked a 10-year high for the well-respected indicator, which forecasts the country’s economic health over the next six months. The indicator has accelerated for a fourth successive month, a sign that the Swiss economy is recovering in a V-shaped manner. Strength in manufacturing and domestic consumption contributed to the strong September data.

The Swiss franc has posted solid gains on Wednesday, as the KOF release boosted the currency. However, another economic barometer of which direction the economy is headed in the next six months pointed sharply downward in August. The Credit Suisse Economic Expectations fell to 26.2, down from 45.6 beforehand. Investors clearly preferred the good news delivered by the KOF Economic Barometer.

We could see further movement from USD/CHF on Thursday, with the release of three Swiss releases. Consumer inflation is expected to remain flat at 0.0%. Retail sales are projected to climb from 4.1% to 4.5%, while Manufacturing PMI is forecast to rise from 51.8 to 53.4 points. 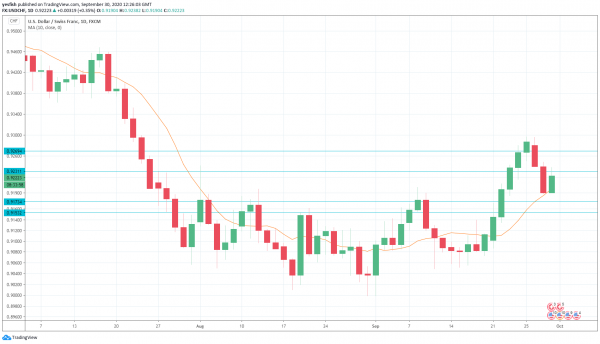 Week Ahead – Fed Meeting, Barrage of Data, and Tech Earnings

Cliff Notes: Gauging Economic Strength at the Turn of the Year

A Tough End to the Week