The US will welcome the final quarter of 2020 with the release of the famous Nonfarm payrolls report as markets get into election mode. The consensus is that the US labor market continued to head towards pre-Covid levels in early September, with the unemployment rate further easing and new job positions rising at a softer pace. While this could be considered normal, the numbers arrive at a crucial time and will be the last update before the US election, exposing the dollar to a fresh round of volatility.

Since the peak at 14.70% in May, the US unemployment rate has been drifting lower as the re-opening plans helped people to return to work. Employment increased vigorously but subsequently, it started to slow down as fewer people remained on the waiting list to be rehired. This dynamic is expected to have continued in the first two weeks of September, with forecasts suggesting a weaker increase of 850k in new job positions from 1.027mln in the previous month, and a slight decrease of 0.2 points in the unemployment rate, which is projected to come in at  8.2%. 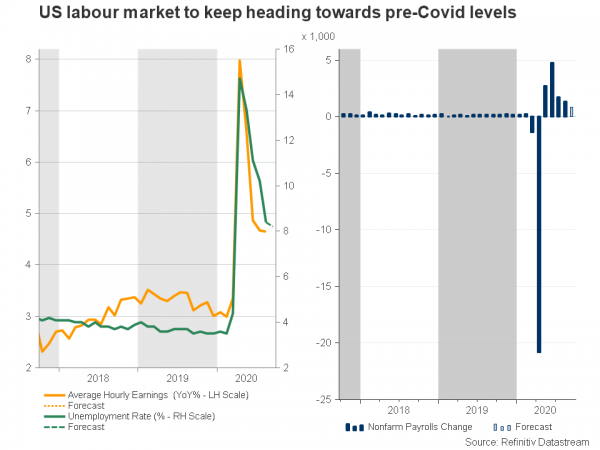 If materialized, the above outcome will not provide any new information to the dollar besides the fact that prevention of another full lockdown combined with accommodative policies will help the economy to gradually absorb its lost jobs. Nowadays, however, there is a lot of political noise in the air and relevant data such as the NFP report will matter more, especially for President Trump who has been criticized for his virus response plan.

First and foremost, the election countdown has already begun in the US and the polls suggest that it could turn a very competitive battle for Trump as his rival Biden is leading in swing states, though marginally. Markets are largely pricing in that a defeat for President Trump could be a dollar negative given the fact that his political agenda is more friendly to businesses than Biden’s, although both candidates may choose to increase taxes if public debt gets out of control next year.

Moreover, after a two-month debate, Republicans and Democrats have yet to find common ground regarding a new pandemic stimulus package in the Congress, while the six-week extension of the $300 employment benefit by Trump has already expired in several states early in September. Consequently, unless a deal is soon reached, household consumption could plummet in the fourth quarter, especially if another virus wave hits the global economy during the autumn/winter season, forcing the resumption of lockdown measures and hence resulting in another significant GDP contraction. Note that the Fed pledged to keep monetary policy accommodative for as long as it takes but it is not planning to release any additional liquidity anytime soon, leaving the ball in the government’s court.

Currently, the risk-off sentiment seems to be the main support for the dollar as the global economy has adopted a wait-and-see approach and Europe is afraid of repeating the virus scenes from spring. A higher-than-expected or a stable unemployment rate delivered along with a smaller increase in job positions would signal that economic conditions in the US have been deteriorating before the start of the risky Q4, adding some pressure to the dollar. Otherwise, should the data beat analysts’ forecasts, the greenback could receive a temporary relief.

From a technical perspective, the euro is in a disadvantageous position following the break below an ascending channel and the confirmation of a bearish trend reversal below 1.1750 dollars per euro. Although it has regained some lost ground, it needs to jump back into the channel and the 1.1870 level to eliminate downside risks, and for that to happen in the near-term, the jobs report should strongly disappoint, and election-related risks should increase. Otherwise, a drop below 1.1600 would further increase the case of a down-trending market.

Fundamentally though, the dollar could turn more vulnerable to negative corrections in the face of political uncertainty, which may extend to 2021 if Congress remains divided. Moreover, the gap between the US and EU 10-year government bond yields has narrowed but has remained steady since the Fed cut rates in spring, making EU bonds and hence the euro more attractive against the greenback.