The Swiss franc is showing little movement at the start of the new trading week. Currently, USD/CHF is trading at 0.9049, up 0.07% on the day. The currency is trying to shake off a mini-slump, after posting declines over four straight days, which resulted in a losing week for the Swissie.

The KOF Economic Barometer, which is composed of over 200 indicators, projects the country’s economic health over the next six months. The index slowed in November for a second successive month, falling from 106.6 to 103.5 points. Still, investors didn’t seem concerned, as the reading beat the consensus of 101.0 points. The decline was primarily due to weaker conditions in manufacturing and foreign demand, as the Covid-19 pandemic continues to take a toll on the Swiss economy. There was more positive news from Swiss retail sales, which rebounded in October with a strong gain of 3.1%, after a negligible gain of 0.3% beforehand. The reading crushed the estimate of 0.6% and marked a 3-month high.

Switzerland finds itself in unfamiliar territory, as GDP has contracted for two successive quarters, which means that the economy was officially in a recession. The last time this occurred was in 2009, during the global financial crisis. There was a sharp economic downturn in the second quarter across the globe, and the Swiss economy plunged by 8.2%. However, we’ve seen strong numbers for GDP in Q3 in most of the major economies, and the consensus for Swiss GDP stands at 6.0%. This estimate doesn’t even make up for the Q2 decline, but a solid gain would boost investor confidence in the Swiss economy, which has been hampered by the Covid-19 pandemic. 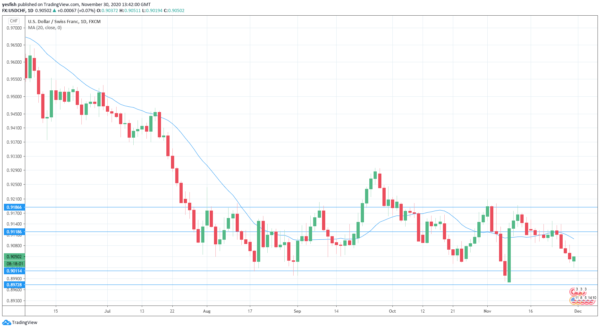