Canadian Employment Up in November Despite Escalating Virus Spread

Overall, a little over 80% of the employment drop in the spring was retraced as of November. And a whopping 45% of the total 574k remaining shortfall is from the accommodation & food services subsector alone. Containment measures will continue to weigh on the hospitality and travel sectors as long the virus threat remains, but restrictions have been more limited than in the first wave, and other sectors of the economy have continued to improve.

Lower-wage workers continue to bear the brunt of job cuts. Employment among those who would normally make less than $800/week was down 760k in November compared to a year ago versus a gain of 458k for those making more than $1200/week (a little more than $60k per year) – although that gap was actually slightly smaller than a month ago.

And government supports are already in place for this round of restrictions. Those programs (expanded EI, the new CRB program) should prevent job losses, particularly at the lower end of the wage scale, from turning fully into income losses for households. This was clearly the case over the spring and summer when household disposable incomes actually rose as job losses mounted thanks to the hastily implemented CERB program. And vaccine news means there is light at the tunnel for those off-work, and for the businesses that employ them. But the next several months will likely still be difficult with escalating virus spread keeping a cap on the economic recovery until vaccine distribution can ramp up. 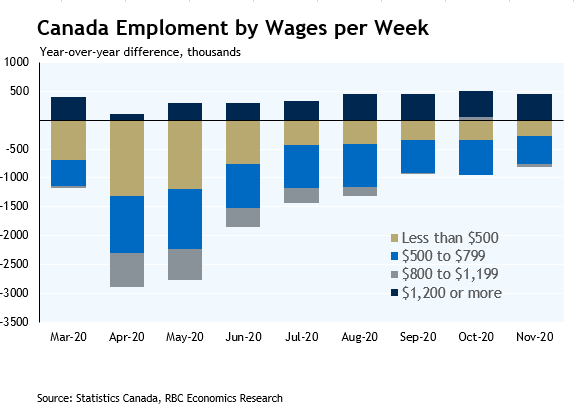