The 63k drop in employment in December was the first decline since the spring, albeit only a fraction of the 3 million pullback over March and April last year. The unemployment rate edged up to 8.6% from 8.5% and the labour force participation rate fell.

The data highlight what is an increasingly bifurcated economic backdrop, with resurgence of virus cases and containment measures dramatically curtailing activity in the hospitality/travel sectors, while other industries have continued to broadly improve.

The drop in employment was led by pullbacks in accommodation & food services (-57k), information, culture, and recreation (-19k), and “other” services (-31k). Outside of those three service-sector industries, employment rose 44k in December – led by a 15k increase in manufacturing jobs. The accommodation & food services subsector alone now accounts for half of the entire 636k shortfall in jobs relative to pre-shock February 2020 levels.

Full time employment increased 37k, with offset from a 99k pullback in part-time jobs leaving worked down a relatively modest 0.3%.

Job losses in December were, as has been the case throughout the entire COVID-shock, concentrated among those at the low end of the wage scale. That, of course, is not a good thing, but government income supports (expanded EI payments, and the new CRB program) continue to provide a significant income offset for lower-income individuals losing out on work.

With virus spread remaining at alarming levels in much of Canada, and containment measures being extended and expanded, both the labour market and broader economic recovery appear to have stalled. We expect the first quarter of 2021 will be a challenging one for the Canadian economy, with no growth in GDP expected. As vaccinations become more broadly distributed we look for the economy to regain its momentum leading to a recovery in job creation. 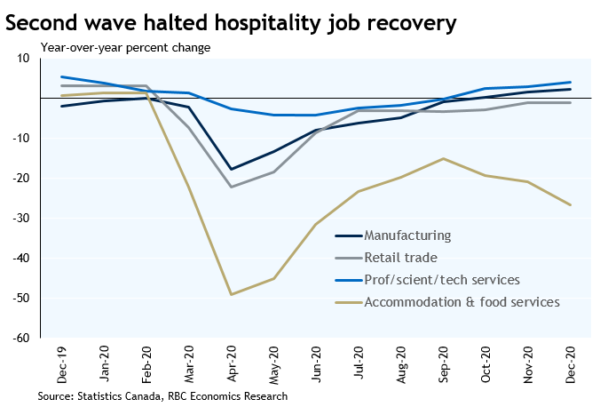 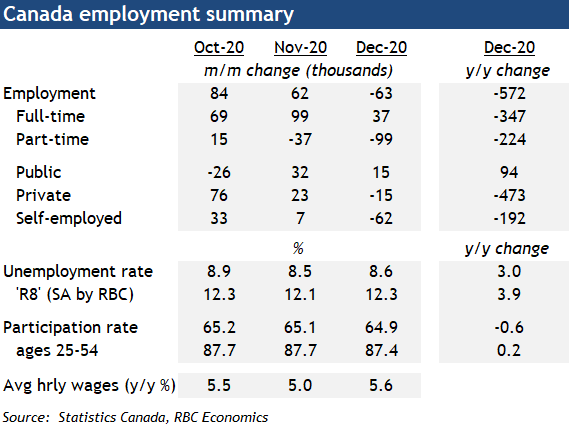