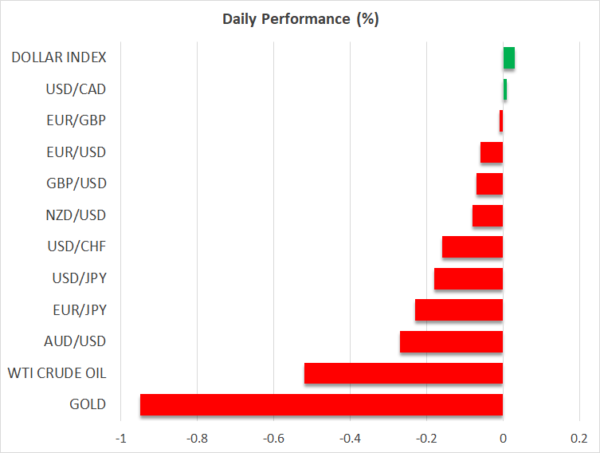 Turkish President Recep Tayyip Erdogan responded to last week’s bigger-than-expected rate hike by the country’s central bank by ousting its governor, Naci Agbal, in a shock move late on Friday. The CBRT hiked rates by a hefty 200 basis points on Thursday in a bid to bring inflation down to the single digits. But it didn’t take long for Erdogan – a strong proponent of low rates – to reveal his ire at the decision. Agbal is the third governor to be sacked in the last two years and has been replaced by a like-minded opposer of high interest rates.

The Turkish lira plummeted by more than 13% at today’s market open, hitting a 4-month low of 8.1745 per dollar and erasing the gains made under Agbal’s tenure. The currency steadied to below 8.00 per dollar as European trading got underway, though the country’s benchmark stock index tumbled by over 8%, amid the fresh turmoil and question marks about the independence of the central bank.

The yen firmed across the board on speculation that many Japanese retail traders that had increased their long lira positions following the recent rate hikes and are now possibly facing significant losses will be forced to unwind some of their other long positions. Nevertheless, although the safe-haven yen, dollar and franc were all notably firmer on Monday, their gains were moderate and there was no sense of panic or spillover outside of Turkey. The Mexican peso and South African rand slipped by about 1% but Asian emerging market currencies were mostly flat against the US dollar.

It was a similar story in equity markets where European shares opened in the red but losses were contained, finding some support in softer bond yields. With a host of other factors dampening risk sentiment over the past week, the lira’s plunge is probably not top of many investors’ concerns right now and has only underscored the souring mood rather than triggered it.

Many European countries are not only seeing a resurgence of Covid cases but vaccinations across the EU continue to lag the UK and US. France announced a new month-long partial lockdown for Paris and several other regions last Thursday, Italy tightened its restrictions, while Germany looks set to extend its lockdown measures. The latest set of curbs have dashed hopes of a major loosening of virus curbs in the spring. But more worryingly, amid the jump in infections, the EU is still struggling to step up its vaccination campaign.

The bloc is threatening to ban some vaccine exports to Britain and other countries in order to boost its own supply. Ironically, the damage caused to the reputation of the AstraZeneca vaccine by EU leaders after they questioned its safety has resulted in millions of unused doses of the jab, in a further setback for the vaccination programme.

In comparison, the UK has inoculated more than half of its adult population with the first dose, while across the pond, President Biden has met his goal of vaccinating 100 million Americans in his first 100 days at the White House.

On Wall Street, e-mini futures were indicating a flat open for the S&P 500 but extended gains for the Nasdaq Composite, which staged an impressive rebound on Friday. There was widespread relief among traders after the Federal Reserve said it will review its rule on the supplementary leverage ratio (SLR), which requires US banks to hold extra capital against Treasuries and central bank deposits. The Fed had provided banks with a temporary reprieve from the SLR rule during the pandemic but decided last week not to extend the exemption, sparking a bit of a spike in Treasury yields.

But the announcement of the review seems to have calmed investors and the 10-year Treasury yield has fallen back below 1.70% today.

This limited the dollar’s advances, though the Australian dollar still came under substantial selling pressure amid a big drop in iron ore prices. Oil also fell on Monday, resuming its week-long slide as the fresh European lockdowns weighed on the demand picture.

But the euro managed to climb off earlier lows to stand marginally lower versus the dollar at just below the $1.19 level. The pound also recovered from its lows, though Brexit frictions continue to linger in the background as the vaccine row with the EU has added to existing tensions over the Northern Ireland protocol.

Later today, attention will turn to Fed Chair Jerome Powell who is due to speak at 13:00 GMT in a panel discussion, while investors will also be keeping an eye on the latest 3- and 6-month Treasury auctions.