The USD inched higher yesterday against a basket of its counterparts and its characteristic that it reached a new year high against the JPY. USD’s strengthening may have been underpinned by the rise of the US treasury yields with the 10-year yield reaching its one-year high level. At the same time the uncertainty in the markets was on the rise yesterday after the collapse of a hedge fund named Archegos Capital, yet we must note that the market worries may have eased somewhat by today’s Asian session. It should be noted though that global banks my occur substantial losses from the downfall of the hedge fund with Goldman Sachs, Morgan Stanley, Nomura, Deutsche Bank and UBS shares dropping while Credit Suisse also warned of major losses. Fundamentals and US financial data could keep trader’s attention today, yet the markets could watch Fed policymakers which are planned to speak.

USD/JPY rose yesterday aiming for the 110.30 (R1) resistance line. We tend to maintain a bullish outlook for the pair as long as it continues to be guided by the upward trendline incepted since the 24th of March. Please note though that the RSI indicator below our 4-hour chart has surpassed the reading of 70 maybe implying that the pair is overbought, and a correction lower is possible. Should the pair continue to find fresh buying orders along its path we may see it breaking the 110.30 (R1) resistance line and aim for the 111.65 (R2) resistance barrier. Should a correction lower come into play and a selling interest be displayed by the market, we may see USD/JPY breaking the 109.25 (S1) support line and aim for the 107.90 (S2) support hurdle.

Pandemic weighs on the common currency

The common currency inched lower against the USD, CHF and JPY as the path of the pandemic in Europe seems to be weakening its outlook. Common currency’s fundamentals seem to continue to include the possibility of lockdowns in Germany and France, preventing the EUR to rise. It should be noted that Germany’s number of daily new cases dropped yesterday, yet an uptrend seems to exist and a similar picture is present in France as well. At the same time news that Italy is about to cut economic growth projections for the year did not help either. Analysts highlight that the spread between US and German bond yields tends to widen and seems to be adding pressure on the common currency. Today EUR traders could focus on financial releases, especially Germany’s preliminary HICP rate as inflationary pressures seem to be building up in the largest economy of the Eurozone.

EUR/USD seems to maintain its sideways movement, yet seems to continuously be testing the 1.1760 (S1) support line. We tend to maintain a bias for a sideways movement yet we also suspect that the bears are just around the corner, as the RSI indicator below our 4-hour chart is between the readings of 50 and 30. Should the bears actually take charge, we may see EUR/USD breaking the 1.1760 (S1) support line and aim for the 1.1695 (S2) support level. Should the bulls be in charge, we may see the pair aiming if not breaking the 1.1830 (R1) resistance line, thus opening the way for the 1.1905 (R2) resistance level.

Today during the European session, we get Switzerland’s KOF indicator for March, Eurozone’s economic and consumer sentiment indicators both for March while later on we highlight Germany’s preliminary HICP rates also for March. In the American session, we note the US consumer sentiment for March and just before the Asian session starts oil traders may turn their focus on the release of the API weekly crude oil inventories figure. Also note that during the American session Atlanta Fed President Bostic and New York Fed President Williams are scheduled to speak. During tomorrow’s Asian session, we get Japan’s preliminary industrial output growth rate for February, from New Zealand the NBNZ business outlook for March, Australia’s building approvals growth rate for February and China’s NBS manufacturing PMI for March. 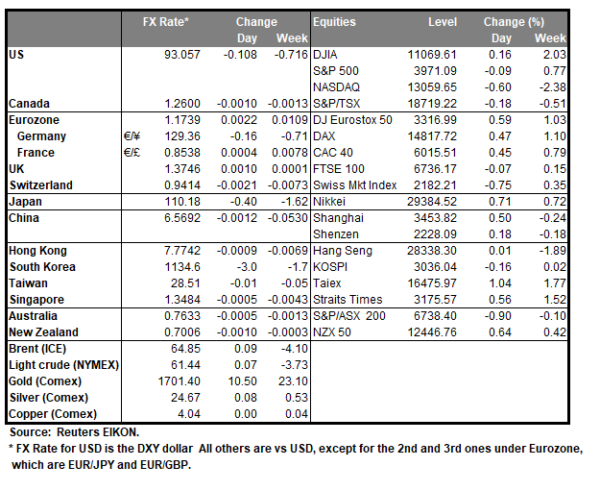 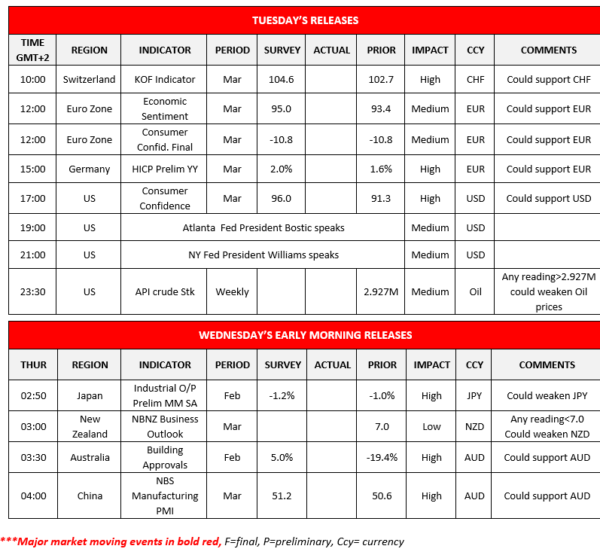