Headline GDP grew 0.7% in January , better than Statistics Canada’s flash estimate a month ago, and despite stringent containment measures that were in place throughout that period. Retail sales pulled back again, as in-store shopping was still restricted in much of the country, and accommodation & food services remained exceptionally soft. The industrial sector at large continued to show strength with manufacturing, construction and mining and oil & gas extraction combined to a 1.9% increase from December last year. That was despite a pullback in auto manufacturing, where output fell 3.2% from ongoing production disruptions triggered by the global semi-conductor shortage.

Output likely grew further in February from StatCan’s preliminary report, up another 0.5% as restrictions began to be eased. Earlier labour market report suggests total hours worked grew 1.4% in the same month. And sentiment data has pointed to improved business and consumer confidence in March. Total annualized GDP growth now looks on track to exceed 5% in Q1, higher than previously expected. Remaining weakness is increasingly concentrated around the hospitality sector, with those industries making up almost 60% of the year-over-year decline in total output in January.

The third wave of virus spread is once again threatening to slow the economic recovery. B.C. already imposed a three-week “circuit-breaker” lockdown, and the alarm is sounding for Ontario. Still, another downturn in economic activity looks less likely given the economy was able to grow (relatively solidly) through the second wave. Meanwhile, vaccine distribution is also escalating with Canada now expecting to receive around 44 million doses of vaccines by the end of June – enough to cover the more vulnerable age groups (above 60) with 2 shots and the rest above 16 with one. 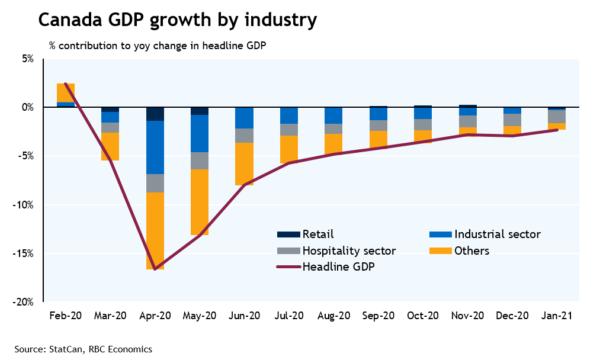 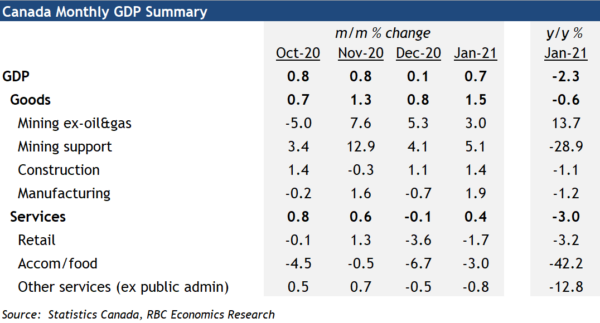