The euro was red-hot early in the week, as EUR/USD posted gains of close to 1.0 percent and pushed above the 1.19 level for the first time in two weeks. However, the pair has gone into pause mode as it hovers slightly below the 1.19 level.

The EU’s vaccine rollout has faltered badly, and daily headlines about the AstraZeneca vaccine being possibly connected to blood clots is only making matters worse. The IMF has downgraded its growth forecast for the eurozone due to the sluggish rollout. Still, the IMF expects the eurozone to show 4.4% growth in 2021 and 3.8% in 2022.

The FOMC minutes didn’t shake up the currency markets, as the Fed signalled to the market that it remains in dovish mode. Members felt that the risks to the economy remain balanced, but at the same time, economic activity remains well below the FOMC’s longer-term goals. The minutes stated that the labor market has not recovered to pre-Covid levels, but on a positive note, stated that the recent rise in Treasury yields pointed to improving economic conditions.

Policymakers at the Federal Reserve remain firmly of the view that the US economy still requires support until the recovery has deepened. With significant slack in the economy, inflation remains at low levels. The Fed believes that any rise in inflation due to improving economic conditions will be temporary. There had been some speculation that the Fed might hint at a tapering of QE, given the sharp improvement in employment numbers, but the minutes made clear that any tapering of QE is off the table for the time being. 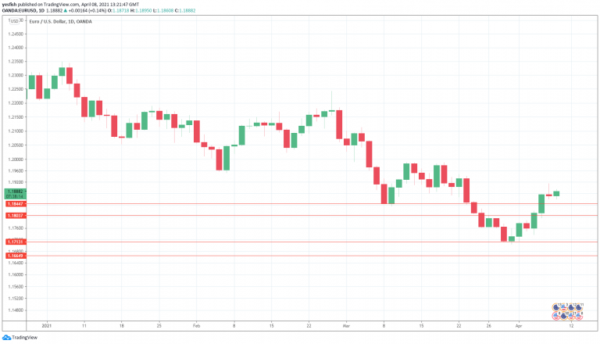