The greenback seems poised to end the week lower against a number of its counterparts, in one of the worst weeks of the year. On the monetary front Fed officials tended to remain rather dovish, with Fed Chairman Powell downplaying inflationary risks for the US economy while St. Louis Fed President Bullard was reported saying that the Fed should not even discuss changes until it is clear the pandemic is over. It also should be noted that the weekly initial jobless claims figure rose instead of dropping as expected, hence tended to disappoint traders and at the same time limit the high expectations created by the stellar figures of the US employment report for March. US yields yesterday did little to push the USD higher, given that the 10-year yield remained rather steady yesterday after three consecutive drops. We expect fundamentals today to continue to be the main driver for the USD, as the number of high impact US financial releases is low.

USD/CHF continued to drop yesterday aiming for the 0.9215 (S1) support line, before stabilising just above it. As the downward trendline incepted since the 5ht of April continues to guide the pair we tend to maintain our bearish outlook for the pair. Please note that the RSI indicator below our 4-hour chart is below the reading of 30, confirming the dominance of the bears, yet at the same time may imply that the pair is oversold and a correction higher is imminent. Should the bears actually maintain control over the pair’s direction we may see the pair breaking the 0.9215 (S1) support line which prevented the pair from descending lower on the 17th of March and aim for the 0.9130 (S2) support level. Should the bulls take over, we may see USD/CHF, the pair could break the prementioned downward trendline, the 0.9300 (R1) resistance line and aim for the 0.9375 (R2) resistance level.

CAD gains ahead of employment figures

The Loonie tended to gain against the USD ahead of the key employment data for March release, distancing from yesterday’s one week low. WTI prices remain rather steady at satisfying levels providing some room for the CAD to gain further given that Canada is a major oil producer. At the same time a risk on environment in the markets, given that the S&P 500 reached new record highs yesterday, tended also to support the commodity currency. Fundamentally it should be noted though that the Ontario province has initiated a 4-week stay at home order, as Covid sweeps through the country. Today we intend to focus on the release of Canada’s employment data release for March, which could provide grounds for high volatility for the Canadian dollar given also BoC’s attention on the Canadian employment market.

USD/CAD dropped yesterday after finding considerable resistance at the 1.2610 (R1) level. We tend to maintain a bias for a sideways movement, given that the pair’s main body of the price action remains between the 1.2610 (R1) resistance line and the 1.2520 (S1) support line since the 23rd of March. Please note that the RSI indicator below our 4-hour chart is at the reading of 50 implying a rather indecisive market currently. Should a selling interest be displayed by the market, we may see the pair breaking the 1.2520 (S1) support line and aim for the 1.2400 (S2) support level. Should USD/CAD find fresh buying orders along its path, we may see it breaking the 1.2610 (R1) resistance line and aim for the 1.2700 (R2) level.

In today’s European session we note from Germany the industrial output growth rate and the trade data both for February, Norway’s CPI rates for March and from the UK the Halifax house prices growth rate for March, while ECB Vice President De Guindos is scheduled to speak. In the American session, we note the US PPI rates for March, Canada’s employment data for the same month while oil traders may be more interested in the Baker Hughes weekly oil rig count and on the monetary front, Dallas Fed President Kaplan is scheduled to speak. During Monday’s Asian session, we get from Japan the corporate goods prices for March. 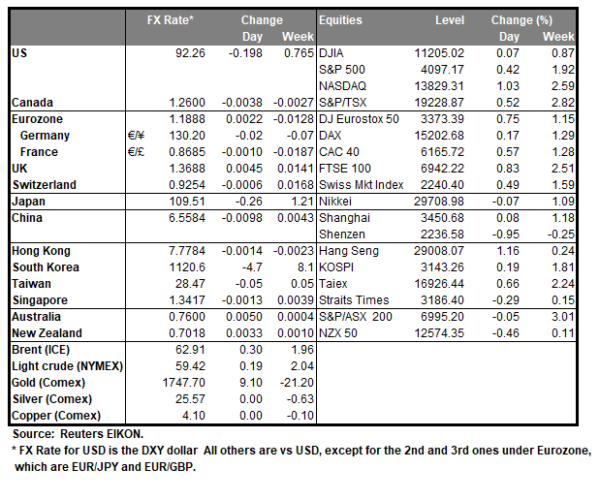 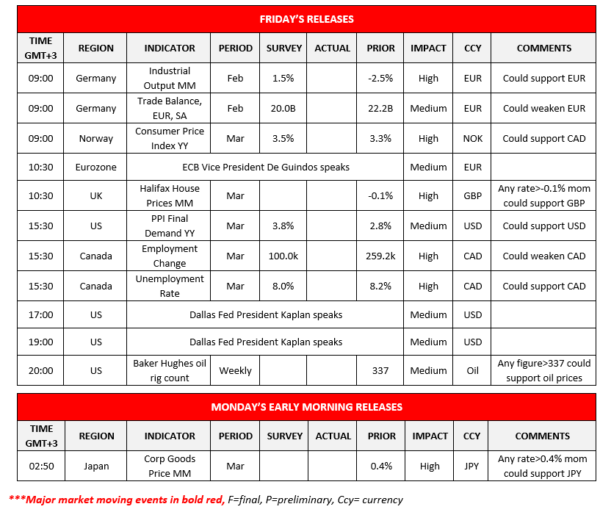