The European Central Bank concludes its April policy meeting on Thursday, releasing its statement at 12:45 GMT and President Christine Lagarde updating investors at a press conference at 13:30 GMT. When policymakers last met on March 11, Eurozone yields were spiralling upwards and the outlook for the bloc’s economy was notably bleaker, prompting them to front-load bond purchases. Yields subsequently settled lower, but they are now rising again. However, this time round, things are looking up somewhat for the euro area. So, will the ECB reaffirm its commitment to keeping yields low or will divisions send yields and the euro catapulting higher?

Daily virus cases in Europe remain stubbornly high and many regions are in some form of a lockdown. However, the economic data hasn’t been quite as dismal as many had feared and the closely watched PMI surveys by IHS Markit point to a strong uptick in business activity in March. Overall activity turned positive for the first time since September 2020 on the back of a bounce in the services PMI, which rose to 49.6 in March, just shy of the 50 level that separates expansion from contraction. 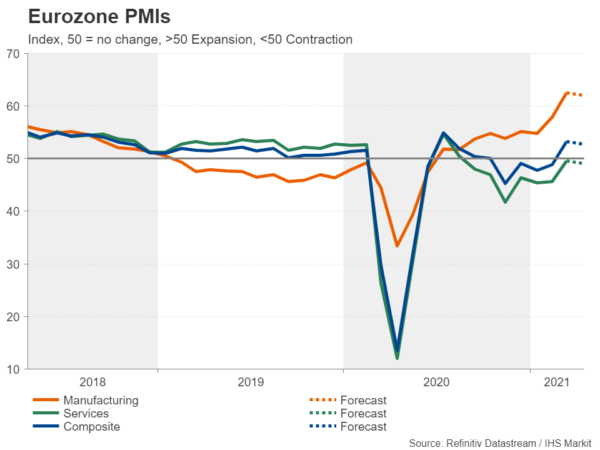 The flash figures for April are due on Friday (08:00 GMT) and are projected to show a slight easing in all sectors. However, the composite PMI is expected to hold above 50, moderating a little to 52.8, with the manufacturing PMI forecast to drop slightly from record high levels to 62.0.

The improving economic picture comes just as vaccine supplies in the European Union have been increasing, pushing the bloc’s vaccination rate to just more than 25% of the population. This is still well below the rates of the US and UK but with vaccine deliveries expected to ramp up further this quarter, investors are becoming more confident about the Eurozone economy’s recovery prospects. 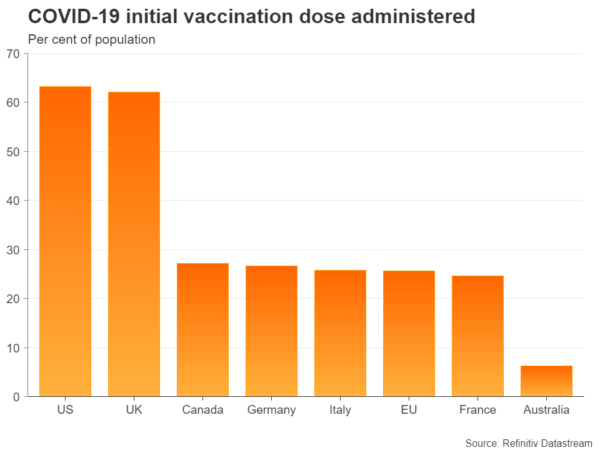 The turnaround in both the data and vaccine rollout has added additional impetus to the euro’s strong bounce in April, which is primarily being driven by the retreat in the US dollar. The sharp move could draw the attention of the ECB on Thursday as many Governing Council members are opposed to sudden appreciations.

Yields are on the up again

However, more worrying than the euro’s ascent right now is the jump in the 10-year yields of the major Eurozone economies. The 10-year German bund yield has risen dangerously close to its February peak and French and Italian yields are up by a similar scale.

The ECB had pledged to accelerate its asset buying at its last meeting, but its own data show weekly purchases were boosted only modestly in mid-to-late March and have since fallen back a bit. The figures add to the misgivings about the central bank’s intention to front-load the bond purchases that are part of its Pandemic Emergency Purchase Programme (PEPP) amid signs of divisions within the Governing Council. 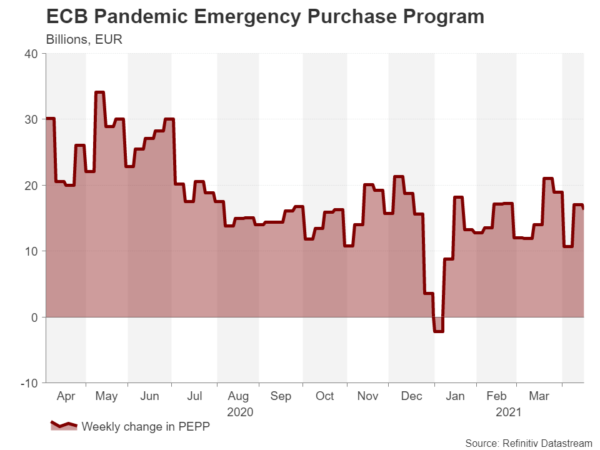 Since the March meeting, some policymakers have indicated that the acceleration is temporary and that asset purchases may start to be reduced from the third quarter, hinting that the PEPP will likely not be extended beyond March 2022 when it expires. Talk of tapering whilst messaging to the markets that a surge in yields is undesirable is sending mixed messages about the ECB’s policy path.

Some dovish members have added caution to the idea of an early withdrawal of stimulus, but once again it appears that Lagarde will have a tough job on Thursday to portray a unified central bank.

No changes are expected in either policy or the language of the statement this week so the entire focus will be on Lagarde’s press conference. The ECB chief will likely sound a little more positive about the Eurozone outlook as the current tough lockdowns and faster vaccinations pave the way for a significant reopening of European economies by early summer.

But with both yields and the euro climbing in the run up to the ECB meeting, there’s a growing risk Lagarde will reassert the ECB’s stance on intervening in bond markets. This could spark some profit-taking in euro/dollar, pushing the pair down to the 50% Fibonacci retracement of the January-March downleg at $1.2026. A slip below this mark would test the proven support level of the 38.2% Fibonacci retracement of $1.1949, which lies just below the 50-day moving average. A steeper selloff could see the pair fall towards the 23.6% Fibonacci of $1.1855.

However, if Lagarde sounds more optimistic than expected about the outlook and doesn’t push back against higher yields forcibly enough, the euro could soon break above the 61.8% Fibonacci of $1.2102. This could then make the February top of $1.2242 the next target for the bulls.

Should the meeting fail to generate much market reaction, investors can bet that the next gathering in June will be a more exciting one when policymakers are anticipated to announce or signal some winding down of their asset purchases.