EUR/USD is taking a pause after ending the week with strong gains. In the European session, EUR/USD is trading at 1.2074, down 0.19% on the day.

The euro continues to take advantage of a US dollar in retreat and gained close to 1.0% last week. April has been kind to the euro, which has jumped 2.94% and recovered all of the losses sustained in March. With US yields depressed, the dollar is having trouble gaining traction.

Manufacturing remains a bright spot in the eurozone economy, and robust PMI helped boost the euro, which gained 0.68% on Friday, its best one-day performance since early February. The German and eurozone Manufacturing PMIs both outperformed, with readings of  66.4 and 63.3, respectively. These figures point to strong growth.

In Germany, the largest economy in the bloc, the Ifo Business Climate index improved to 96.8 in April, little changed from 96.6 a month earlier. However, this missed the forecast of 97.8, disappointing the market and putting some pressure on the euro.

German consumer confidence has yet to find its feet, as German GfK Consumer Climate has not posted a reading in positive territory since March 2020, when the Covid-19 pandemic hit Europe. The German consumer has limited her spending, and the lockdowns have kept many businesses and services shut. This has taken a toll on the economy, and GDP for Q1 is expected in at -1.5%. The services sector continues to struggle, as March PMIs for France, Germany and the eurozone were just above the neutral 50 level, which indicates that services are stable but not expanding.

Investors will be keeping a close eye on the FOMC meeting on Wednesday (18:00 GMT). The Federal Reserve has insisted that it will not stray from its dovish stance, but as the economy heats up and inflation moves higher, the market will be looking closely for any clues about tapering QE. 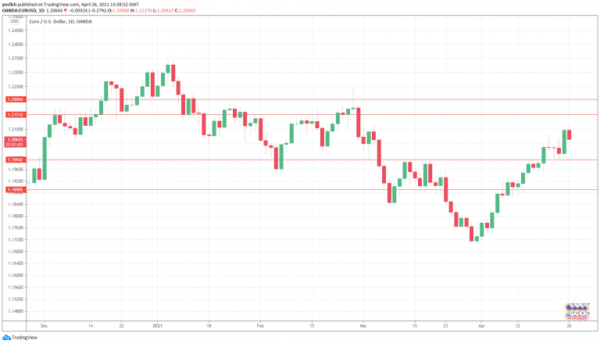