Global stocks were relatively mixed in early trading as investors reacted to the new agreement by G7 member states on taxation. In Asia, the Hang Seng and Nikkei 225 indices declined by more than 0.30% while American and European futures declined by more than 0.15%. The deal reached among the seven countries, will impose a minimum tax of at least 15% and give countries more authority to tax digital companies like Alphabet and Apple. The indices also declined after Flex, a Singapore-based semiconductor company, warned that the ongoing chip shortage will persist at least until 2022.

The US dollar retreated against key currencies as investors continued to react to weak US non-farm payroll numbers. The data showed that the US added more than 559k jobs in May while the unemployment rate dropped to a new post-pandemic low of 5.8%. The total additions were less than what most analysts were expecting and the ADP estimate. The data cheered many investors who believe that the Fed will not have an incentive to start tightening in the near term. The same picture happened in Canada, where the economy lost more than 60,000 jobs in May.

The Australian dollar strengthened slightly against the US dollar after relatively strong services PMI data from the country. According to the Australian Industry Group (AIG), the services index rose from 61.0 in April to 61.2 in May. The data provided a further signal that the economy is doing relatively well as the country reopens. The labor market is also strong after data by ANZ showed that job advertisements increased from 4.9% in April to 7.9% in May. Later today, the key data to watch will be the Swiss unemployment rate and inflation, German factory orders, and the Halifax house price index from the UK.

The EURUSD pair rose sharply after mixed non-farm payroll data. On the four-hour chart, the pair is trading at 1.2161, which is slightly higher than Friday’s low of 1.2100. The price moved above the 23.6% Fibonacci retracement level, but it remains slightly below the 25-day moving average (MA). The Relative Strength Index (RSI) also rose from 30 to the current 45. Still, the pair seems to be forming a head and shoulders pattern, meaning that it will likely retreat going forward. 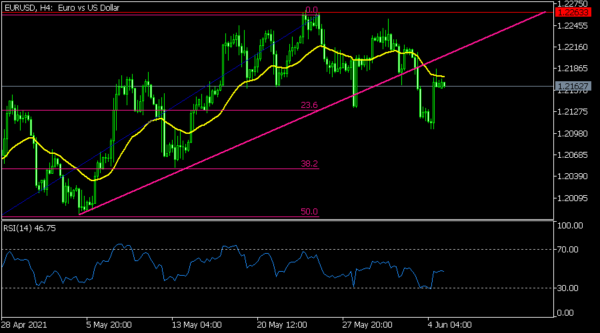 The EURGBP pair rose 0.8600 in early trading. On the four-hour chart, the pair has risen from the important support at 0.85600 and moved above the 50% Fibonacci retracement level. Like the EURUSD pair, the EURGBP has also formed a head and shoulders pattern while the Relative Strength Index (RSI) has moved relatively higher. The pair will likely resume the downward trend later this week because of the H&S pattern.

The ETHUSD pair rose to a high of 2,787 in early trading. On the four-hour chart, the pair moved above the upper side of the symmetrical triangle pattern. It also crossed the 25-day moving average and is slightly below the 38.2% Fibonacci retracement level. The RSI has also created a bullish divergence pattern. The pair will likely push higher as investors target the psychological resistance at 2,900. 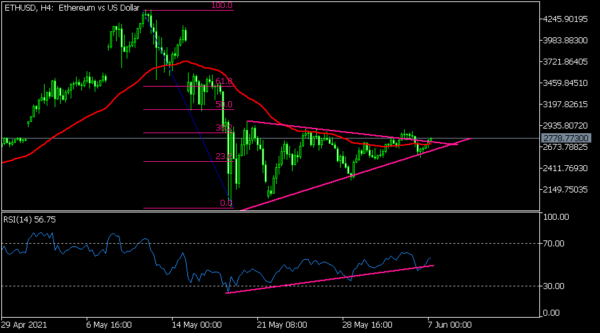