Action Forex
HomeContributorsFundamental AnalysisECB Signals It's Too Early To Taper

The European Central Bank (ECB) held monetary policy steady at today’s meeting, keeping its Deposit Rate at -0.50% and making no changes to its asset purchase programs. The ECB also signaled it was too early to taper its bond purchases, saying that it expects an accelerated pace of purchases to continue during Q3. At this stage, so long as the Eurozone economy shows a perceptible firming in growth in the months ahead, we expect the ECB to announce a slower pace of bond purchases from Q4 2021 at its September meeting.

The European Central Bank (ECB) held policy steady at today’s monetary policy announcement. With respect to interest rates, the ECB kept its Deposit Rate at -0.50%. Most interest heading into the meeting had been on the central bank’s bond purchase plans. On that front, the ECB kept its Pandemic Emergency Purchase Program (PEPP) at €1.85 trillion, and said that purchases would run until at least March 2022. The ECB also said its PEPP purchases would be flexible with respect to time, asset classes and countries. In addition, the central bank said it would continue its purchases under the Asset Purchase Program (APP) at a pace of €20 billion per month.

There had been particular interest heading into the meeting regarding whether the ECB would slow the pace of its PEPP purchases, after it had accelerated purchases under the program earlier this year. On that front, the ECB announcement signaled that it was too early for the central bank to taper its purchases at this time. Specifically, the ECB said:

“Based on a joint assessment of financing conditions and the inflation outlook, the Governing Council expects net purchases under the PEPP over the coming quarter to continue to be conducted at a significantly higher pace than during the first months of the year.”

The announcement is not all that surprising. Although confidence surveys indicate an upswing is now likely underway, activity data are still somewhat mixed. In particular, the 3.1% month-over-month decline in Eurozone April retail sales was larger than expected. Recent comments from ECB policymakers had also given no strong indication a slowing of the pace of bond purchases would be announced at this week’s meeting. Nonetheless, the unchanged pace of bond purchases is something of a contrast to other G10 central banks (Bank of Canada, Bank of England) that have already begun to taper their asset purchases. As a result, the market reaction, which included a modest initial drop and subsequent rebound in the EUR/USD exchange rate, was not all that surprising either. At this stage, so long as the Eurozone economy shows a perceptible firming in growth in the months ahead, we expect the ECB to announce a slower pace of PEPP purchases from Q4 2021 at its September meeting. From a foreign exchange perspective, while we do expect the euro to gain against the U.S. dollar over the medium-term, it could lag gains in other G10 currencies such as the British pound or Canadian dollar. 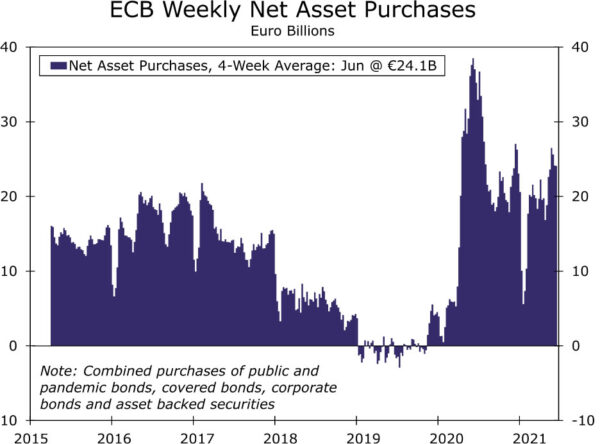