FTSE Set To End Week On A Cheerful Note

European markets have opened higher this morning, with the FTSE finally breaking out after global stock indices rallied on Thursday, when the S&P 500 hit a new record high. Sentiment remains positive as major economies emerge from lockdowns, while central banks are still keen to maintain their emergency stimulus measures in place.

It appears as though the market is so confident that the Fed will maintain its current policy stance that even a 5% CPI inflation in the US didn’t scare the markets. With stocks rising, and both the dollar and yields falling, investors clearly believe that the Fed will still stick to script next week and e-iterate its view that the upsurge in prices is going to be temporary.

The drop in bond yields has boosted the appetite for all risk assets, especially low and zero-yielding assets such as growth stocks in the technology sector and precious metals. Gold and silver have both rallied, with the grey metal getting ever closer to that $30 handle. There’s little surprise to see silver miner Fresnillo being among the top risers on the FTSE today. Glencore and Antofagasta were also near the top of the winners on the FTSE today.

The markets were also relieved to see a dovish European Central Bank. Christine Lagarde, the ECB President, said it is too early to discuss ending PEPP now, adding that the spread of virus mutations continues to be a source of downside risk. The central bank pledged to buy debt at a “significantly higher pace” than during the first months of the year.

The supply of freshly printed ECB money will undoubtedly find its way into other assets including precious metals and European stocks. 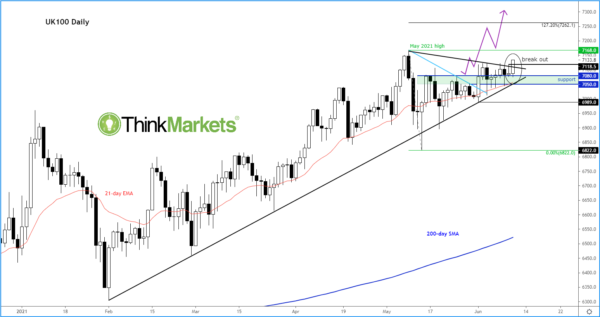 After coiling for several days inside a narrowing range, the FTSE has finally resolved the consolidation by breaking higher. As a minimum, I think a rally to a new yearly high above May’s peak at 7168 is now on the cards. But the potential is there for the FTSE to go marching much higher over time, especially given the lengthy consolidation prior to today’s breakout. What the bulls wouldn’t want to see is for the index to go back inside the congestion zone later today as that would represent a failed breakout attempt.