Mood Sombre In The Aftermath Of Hawkish Federal Reserve

…But it is not all doom and gloom.

Although bond yields have stopped going further higher for now, the US dollar managed to extend its gains this morning in the aftermath of the Fed’s hawkish meeting. The EUR/USD dropped further below the 1.20 handle and zero-yielding assets like gold remained out of favour. European stock indices recovered from their worst levels as banks found support on firmer bond yields. But the buying pressure was weak.

Overall, the mood was a bit sombre as investors wondered whether the likes of the ECB and BoE will soon also signal their intention to slow down their own bond buying programmes. The Norges Bank, meanwhile, became the latest central bank to turn hawkish as it held rates at zero, as expected, but said a rate hike is most likely in September.

However, let’s not forget that the Fed was going to start the tapering talk eventually and the fact they have now started goes to show the US and global economies have come a long way from the height of the pandemic. It will still be months before QE is actually reduced and even then monetary policy will still remain extremely accommodative. Other central banks such as the ECB and BoJ will continue to provide ample liquidity to keep their economies – and the markets – supported. Against this backdrop, I reckon the weakness is going to short-lived for the major indices, especially those that have plenty of value stocks. However, growth stocks may struggle if yields continue to rise from here.

The US Federal Reserve was as hawkish as it could have been in these circumstances and caught the market by surprise. The upward revisions to GDP and inflation forecasts, as well as the dot plots, all suggest that even the Fed was surprised by the inflation surge and the speed of vaccinations.

At the FOMC’s press conference, Fed Chair Jay Powell said he was “confident that we are on a path to a very strong labour market” and that the economy “has clearly made progress.” He confirmed that policy makers would begin a discussion about scaling back bond purchases: “You can think of this meeting as the talking-about-talking-about meeting, if you like.” 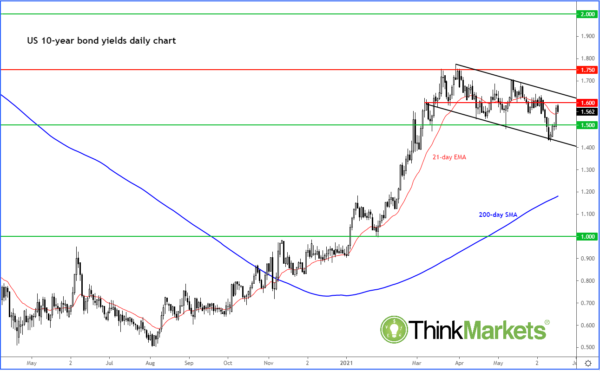