The testimony by Chairman Powell before Congress didn’t reveal anything new, so markets will now turn their gaze to the upcoming US data on Friday. With the Fed expected to take the next step towards tapering in August, every data point is crucial. As for the dollar, the wind could continue to blow in its favor as markets position for less Fed liquidity, especially with the ECB heading in the opposite direction.

The Fed sent shock waves through financial markets lately after it signalled that a decision to wind down the enormous asset purchase program is imminent. Policymakers have stressed that this process will be slow, but they want to get the ball rolling, fearful of overheating the economy and being forced to slam on the brakes even harder later.

The US economy is strong thanks to the tremendous spending packages, with inflation running hot and consumption booming. The only dark spot is the labor market, which is still far from a full recovery. That said, the Fed thinks it’s only a matter of time. The economy is overflowing with open jobs and when the generous unemployment benefits expire in September, a flood of workers could return. 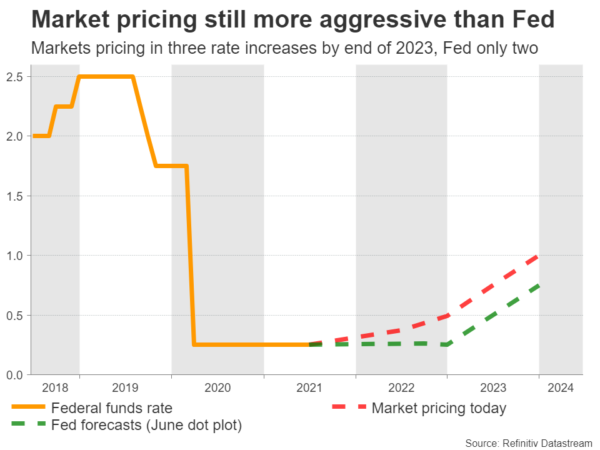 Therefore, everything hangs on economic data. If they continue to recover, the Fed could send the first major signal for tapering at the Jackson Hole economic symposium in late August, before officially announcing at its September meeting that tapering will begin by year-end.

Given the importance of incoming data, investors will pay close attention to durable goods orders for May that are due on Thursday, before the focus turns to Friday’s releases.

Those include consumption and income figures for May, alongside the Fed’s favorite inflation metric – the core PCE price index. Forecasts point to a substantial acceleration, but that wouldn’t be any surprise for investors following the sizzling hot CPI print for that month.

In other words, the upcoming figures are expected to confirm what we already know. The US economy is in good shape yet inflation is starting to fire up, so the Fed is itching to hit the normalization button.

What’s next for the dollar

Blending everything together, the outlook for the dollar seems quite promising here, especially against the euro. The Fed will likely be one of the first central banks to withdraw liquidity and ultimately raise interest rates, while at the same time, the European Central Bank (ECB) may head in the opposite direction. 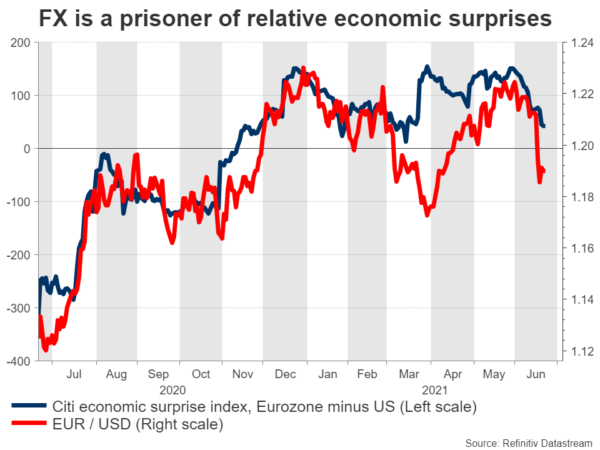 The latest reports suggest the ECB is considering raising its inflation target, which would signal that it intends to keep policy loose for a very long time. It hasn’t been able to hit its inflation target sustainably for a decade now, so raising that target implies negative rates for even longer.

Therefore, in September we might simultaneously get an announcement that the Fed is moving away from cheap money, while the ECB commits to a prolonged period of negative rates. That would signal policy divergence between the world’s two largest central banks, spelling downside risks for euro/dollar.

The catch is that much of this could be baked in by September. Markets won’t wait for the actual announcement. They will likely price in this narrative as new information rolls in over the summer.

The main risk to this view would be a string of weak US jobs numbers. If we get a couple of massively disappointing jobs reports, this narrative could come under heavy fire. However, that seems like a low-probability scenario considering how much money has been thrown at the problem.

Taking a technical look at euro/dollar, initial support to further declines may come from the 1.1845 zone, a break of which would turn the focus towards the 1.1700 region.

On the upside, the first barrier for buyers might be the 1.1990 area, which also encompasses the 200-day moving average. Moving higher, the inside swing low of 1.2050 could provide resistance.