The Swiss franc is practically unchanged on Thursday. In European trade, USD/CHF is trading at 0.9245, down 0.05% on the day.

SNB cuts back on forex purchases

The Swiss National Bank (SNB) hasn’t been shy about intervening in forex markets in order to influence the USD/CHF exchange rate. The reason for these moves is to curb demand for the Swiss franc, in order to ensure prices stability and keep Swiss exports competitive on world markets. The SNB went on a forex shopping spree in 2020, selling some 110 billion francs in order to buy foreign currencies. The intervention went to such an extent that the Trump administration labeled Switzerland a currency manipulator in December 2020.

The global recovery has had a dramatic impact on SNB intervention. The central bank axed its forex purchases to just 296 million francs in the first quarter of 2o21. As the global economy has recovered, risk sentiment has risen, making the safe-haven Swiss franc less attractive to investors.

Retail sales settled down, with a modest gain of 2.8% in May YoY. This follows a massive surge of 34.8% in April. The latter figure should be taken with a grain of salt, as the April 2020 release was particularly weak due to the introduction of Covid health restrictions.

Inflation levels remain subdued in Switzerland. In June, CPI showed a gain of 0.6% YoY, unchanged from May. This was just shy of the estimate of 0.6%. The SNB has an inflation target of 2%, and with inflation hovering well below this level, has no plans to tighten policy. Currently, interest rates are at the ultra-low level of -0.75%, another tool the central bank uses to curb enthusiasm for the Swiss franc. 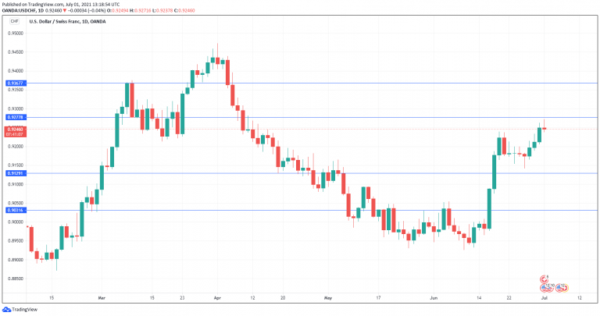