After the S&P 500 hit a new record in the aftermath of the FOMC minutes last night, the markets have gone into a bit of a reverse. Already struggling, Chinese and Japanese shares sold off again during Asian hours, which soured sentiment as European investors started their day. Here, the major indices fell about 1% shortly after the open before extending their declines by mid-morning, with some indices showing losses of more 2% by midday in London. The risk off tone was evidenced elsewhere, too, with US futures, crude oil and copper prices all weakening. Safe-haven currencies – the Japanese yen and Swiss franc – rallied, while risk-sensitive commodity dollars and EM currencies slumped. Bond prices continued to rise, causing their yields to fall further with the 10-year US Treasury dipping to 1.25%, its lowest since 16 February. The falling yields weighed on banks with Barclays shedding nearly 4% to make it one of the worst performing stock on the FTSE 100. Gold found some mild support on the back of falling yields and risk-off tone. Will US investors save the day once again and buy this latest dip, or is this the start of a more meaningful correction?

So, what is going on?

This morning certainly, investors didn’t appear to be in a cheerful mood. It looks like optimism over a sharp global recovery has been replaced by mild fears that growth is nearing a peak and that central banks are likely to slowly taper their emergency stimulus measures. Rising cases of the delta variant of Covid-19 has weighed on the recovery prospects, with Japan officially declaring state of emergency for Tokyo just two weeks before the Olympics. The drop in yields is indicative of indicative of the death of the reflation trade, and I wonder whether this is to do with a big fall in commodity prices of later. This week’s big drop in oil prices has certainly reduced inflation concerns a little.

Tapering concerns are also weighing on the markets. The FOMC’s last meeting minutes, released Wednesday, more or less confirmed policymakers are ready to taper QE, even though officials still felt that substantial further progress on the US economic recovery “was generally seen as not having yet been met.”

Will the markets recover?

Surely if growth concerns rise and the recovery slows down again, the Fed may well delay tapering. What’s more, the European Central Bank is continuing to provide ample monetary stimulus. Today, the latter is expected to announce the outcome of an 18-month strategy review. Most ECB watchers are expecting the central bank to redefine its inflation target. Instead of the current “below but close to 2%,” the central bank is likely to declare a 2% target.

If so, this would effectively raise their inflation goal to 2%, allowing the central bank room to overshoot inflation if and when needed. In other words, the new strategy would allow the ECB to justify sustaining its ultra-loose monetary policy for longer.

Thus, the selling pressure could ease soon as investors realise that central bank support will be there if the economic recovery stalls, or there is a bit of turmoil in the markets.

That being said, things could potentially get uglier before the bargain hunters are tempted to dip their toes in.

As it is the “ECB day,” let’s keep an eye on the DAX. The German index has just broken out of its recent range, so there is likely to be more downside risks than upside in the short-term outlook. We could see a possible drop to test liquidity beneath 15280 soon. Key resistance now comes in around 15500. 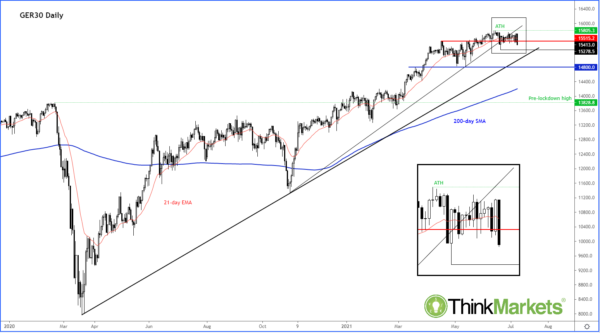