Swissie Drifting ahead of ZEW Expectations

The Swiss franc is showing limited movement in the Tuesday session. In the North American session, USD/CHF is trading at 0.9140, down 0.15% at the day.

The US dollar has retreated against the majors this week, and the Swiss franc has also made inroads against the greenback. The round number of 0.9100 has held in support since mid-June, but this line could face pressure if the dollar continues to weaken.

On the fundamental front, Switzerland releases ZEW survey expectations for July on Wednesday. The indicator is a useful gauge of business conditions. The June release wasn’t pretty, as the index slumped to 51.3, down from 72.2 in the previous release. The June figure pointed to stagnation, barely above the 50-level which separates contraction from expansion. The index has been in expansion territory throughout 2021, and a drop below 50 could sour investors on the Swiss franc. We’ll get another look at the health of the Swiss economy on Friday, with the release of the well-respected KOF Economic Barometer. The index has looked strong and came in at 133.4 in June. The consensus for July is 130.0.

The FOMC policy meeting is the highlight of the week and marks the last meeting before the Jackson Hole Symposium in August and the September policy meeting. The markets are looking for the Fed to provide some guidance, preferably a timeline, on plans to scale back asset purchases, given the economy’s impressive recovery from the Covid-19 downturn. Investors will be looking for more from the Fed meeting than another declaration that inflation is transitory. It’s unlikely that the Fed will announce a taper timeline, but hints about a taper would likely provide the US dollar with some much-needed support. 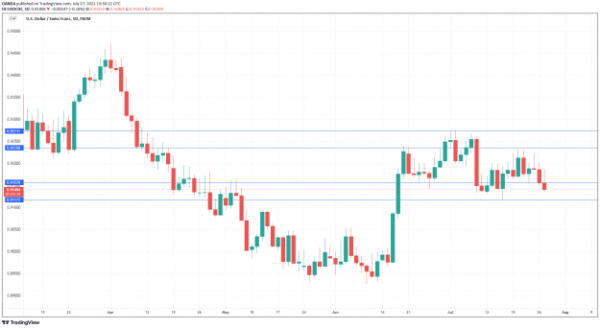