The European stock market rally is continuing and growing in strength. The German DAX and Stoxx 600 hit new record highs yesterday, the UK’s FTSE climbed to a new post-lockdown and yearly high, while the Spanish Ibex, which has been lagging, climbed to its best level since June. At the start of today’s session, there was a bit of hesitation, but the small dip was again bought, causing the markets to turn positive.

Why are the markets so strong?

European stocks have been rising for several reasons, including confidence about the global economy amid ongoing vaccinations, decent corporate earnings and the lack of much sentiment-sapping news, with investors showing not much concerns over the delta variant of coronavirus.

In fact, the delta variant is helping the stock markets in a big way, as it encourages major central banks such as the European Central Bank and US Federal Reserve to maintain their respective emergency stimulus measures in place for an extended period of time. The ECB in particular is in no rush to reduce its asset purchases given the comparatively lower rates of inflation across the Eurozone and a slower economic recovery than the US. The flood of cheap central bank money is driving investors into higher-yielding stock markets, as well as other sorts of risky assets such as cryptocurrencies.

Rotation to European stocks from mature US market?

With the rally on Wall Street slowing in recent times and having led the global markets for years, I wouldn’t be surprised if some investors are actively rotating out of US stocks and into Europe, where the markets have been a lot less buoyant — not just since the height of the pandemic, but also since the financial crisis. But the ECB’s growing balance sheet and steady economic progress in the Europe means investors have been warming towards EU markets more than ever.

Meanwhile on Wall Street, valuations are sky-high – an additional reason why some investors are preferring European stocks. But there is a risk that the bubble may get very large before it eventually deflates. So, the US stock market rally may still have a lot more fuel left in the tank. There seems to be acceptance that we are getting very close to the time the Fed will start reducing its asset purchases. But investors know the Fed will not apply the brakes too harshly. Fed Chair Jay Powell is expected to provide the roadmap for tapering either at the Jackson Hole Symposium or at the FOMC’s September meeting, after several Fed officials have all recently talked in favour of reducing the massive QE programme by later this year or in early 2022.

The DAX has broken above key resistance in the 15800 area, which means dips back into this zone could be supported. The trend will remain bullish until there is a break down in the market structure of higher highs and higher lows. The last low prior to the latest breakout comes in at 15045. For as long as the index holds above this level, the bullish bias would remain intact. 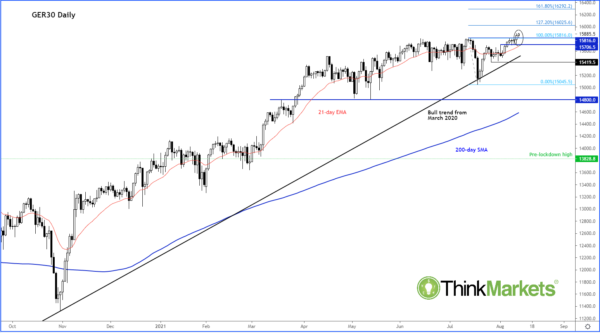 The FTSE has finally broken above its prior high, meaning the bulls are undoubtedly in control. Look for dips to be bought as the UK index plays catch up with US and European peers. Today’s news that the UK economy grew by a robust 4.8% in the second quarter after a 1% month-over-month expansion in June, both measures beating expectations, should help to maintain the positive sentiment. 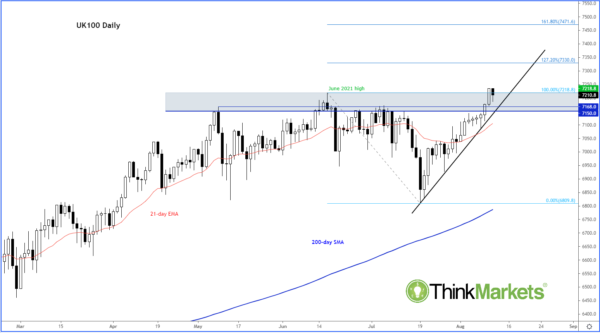