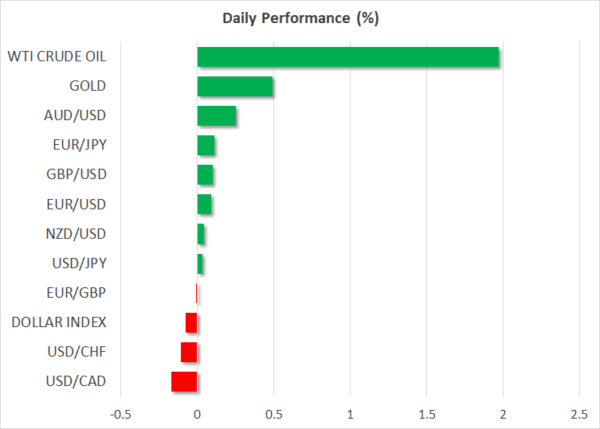 As all eyes turn to Jay Powell’s keynote address at the virtual Jackson Hole symposium later today, three Fed officials made clear where they stand on tapering in the last 24 hours. Kansas City Fed President Esther George, who’s hosting the event, was the first to break cover, with Bullard and Kaplan following in her footsteps to signal a “sooner rather than later” message on when the Fed should begin scaling back its emergency asset purchases.

Treasury yields extended their gains after the hawkish remarks as investors anticipate the Fed chief to also signal that the time to taper is near. But Powell is unlikely to commit to a specific timeframe, not just because of his dovish lean but also due to the fact that policymakers have not been able to meet in person to forge a consensus.

However, with a taper announcement at some point in the fall becoming more and more certain, the focus now is fast shifting from the start date to the end date. Bullard has indicated he wants QE to end in the first quarter of 2022. That may be viewed as too hasty by the markets, especially as the Delta variant continues to cause disruptions to economic activity around the world. Powell will have to strike the right note in terms of balancing the need to withdraw some stimulus with the persisting downside risks from the pandemic.

If investors don’t get enough reassurances that the process will be gradual, they may yet throw a taper tantrum.

Wall Street wobbles but no panic

Shares on Wall Street ended a five-day winning streak to end between 0.5% and 0.6% lower on Thursday amid some taper jitters. However, the losses were likely magnified by the added risk-off tone arising from the attacks outside Kabul airport in Afghanistan that killed 13 US troops. Although fears of instability in the region are growing, the market impact from headlines about Afghanistan has so far been limited and will probably stay that way.

US stock futures were rebounding on Friday, pointing to gains of 0.3% at the open. Shares in Europe were mixed but in Asia, only Chinese indices managed to close higher as virus woes continue to sap sentiment.

It’s not just in low vaccinated Asian countries, though, that the Delta variant is spreading uncontrollably. The number of people hospitalized in the United States is back above 100,000 and in Britain, there are fears that cases will soar once schools reopen.

As the global recovery comes under threat again, optimism is becoming increasingly reliant on hopes that monetary policy will remain accommodative for the foreseeable future even though many central banks have been moving in the opposite direction lately. South Korea’s central bank hiked rates for the first time during the pandemic on Thursday. But in China, policymakers have been trying to calm markets by ramping up cash injections into the banking system this week whilst signalling that the reserve requirement ratio for banks could be cut again very soon.

Dollar mostly down ahead of Powell

The rising uncertainty about the outlook and geopolitical tensions lifted gold yesterday. The precious metal briefly topped the $1,800/oz earlier today before pulling back slightly but was still last up 0.2%.

A firmer US dollar as European trading got underway is likely weighing on gold. But most majors held onto their earlier gains versus the greenback and it was mainly the underperforming pound that lifted the dollar index into positive territory, albeit very marginally.

Doubts about how long the UK will be able to go on without any social distancing measures to keep the virus in check could be what’s troubling sterling this week as the other risky currencies such as the aussie, loonie and kiwi have posted a much more impressive rebound.

Coming up later today, the core PCE price index as well as personal income & spending numbers will be watched out of the US alongside Powell’s Jackson Hole speech that’s due at 14:00 GMT.