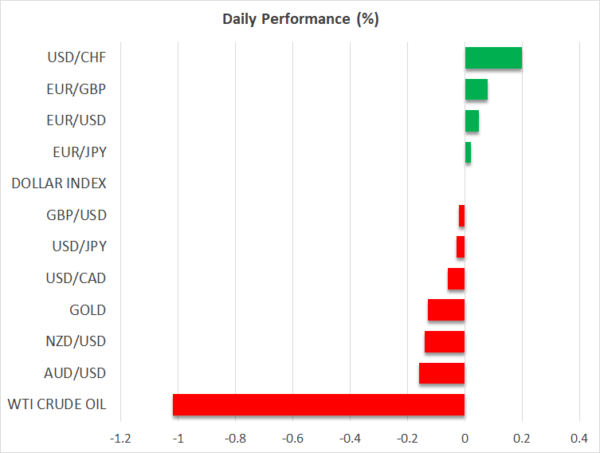 Global markets breathed a sigh of relief on Friday after the world’s most important central banker didn’t outline a clear roadmap towards normalizing monetary policy. Speaking at the Jackson Hole symposium, Fed Chairman Powell highlighted the Delta outbreak as a risk that has escalated lately and repeated that inflation will likely cool down soon.

He essentially hedged his bets, signaling that the tapering process could still begin this year, although that will depend on how the virus situation evolves. The main takeaway was that Powell is not in a rush to dial back asset purchases, with investors reading his vagueness as diminishing the chances of a September announcement.

Hopes that markets will stay flush in central bank liquidity for a while longer catapulted stocks on Wall Street to new record highs and hammered the dollar lower alongside Treasury yields, putting the shine back into gold. Commodity currencies advanced as well, capitalizing on the broader risk-on atmosphere.

That said, not much has changed in the big picture. The question is not whether the Fed will taper, but rather when this process will begin and how long it will last. The tea leaves now point towards a November announcement, with the Fed likely turning more hawkish in September to prepare the markets if the economy keeps humming along and the Delta outbreak abates.

Despite some recent signs that economic growth is losing steam, for instance with the composite Markit PMI falling and consumer confidence cratering in August, the US economic machine is still firing on most cylinders. The economy is already larger than it was pre-crisis, there are now more open jobs than people unemployed, and Congress is working on another supermassive spending package to juice up growth.

On top of everything, inflation might not cool as quickly as the Fed thinks. Supply chain disruptions are getting worse with shutdowns across Asia, causing freight shipping costs to skyrocket further and lengthening delivery times. Meanwhile, the US Supreme Court has canceled the ban on evictions, so rents could begin to play catch-up with soaring house prices, helping inflationary pressures to broaden out.

Therefore, the outlook for the dollar remains promising. Whether the Fed pushes the taper button in September or November doesn’t matter much – it is still years ahead of the ECB and the BoJ in the normalization business. This ultimately argues for the dollar to outshine the euro and yen as investors warm up to carry trades again.

For now, a lot will depend on the upcoming US employment report on Friday. It could single-handedly decide whether September is a ‘live’ meeting for the Fed or not.

Beyond that, there are some crucial PMIs from China coming up on Tuesday. The world’s second-largest economy is losing momentum and if this data disappoints, that could telegraph more stimulus measures from Chinese authorities.

Finally in commodity markets, oil prices went for a rollercoaster ride. Crude opened the week higher as a category-four storm near the Gulf of Mexico threatened to disrupt production, only to surrender those gains and trade lower overall once the storm was downgraded in severity. 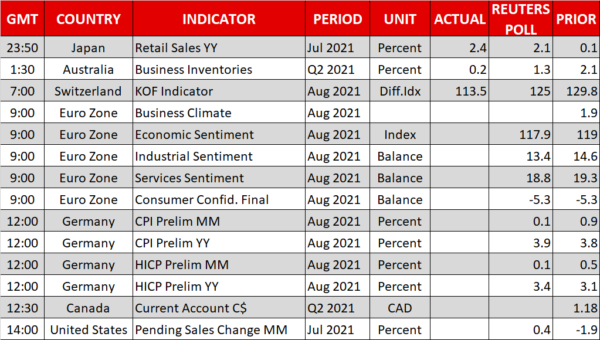