Jerome Powell, the current Chair of the Federal Reserve System, has had a long and distinguished career at the Federal Reserve Board. He began his career as a monetary policymaker in May 2012 when he was appointed by President Obama and confirmed by the Senate as a Governor of the Federal Reserve System. President Trump gave him a promotion of sorts on November 2, 2017 when he nominated Powell to serve as the central bank’s 16th Chairperson, and the Senate subsequently confirmed him to that position on January 23, 2018 by a vote of 84-13. Because Powell’s term as Fed Chair is scheduled to end in February 2022, President Biden has a decision to make in the coming months: Should he nominate Powell for another four-year term as Fed Chair, or should he nominate someone else?1

Pricing on PredictIt.org implies that Powell has a probability in excess of 85% of being renominated. Lael Brainard, who has served as a Fed Governor since June 2014, is a distant second at roughly 10% probability. Roger Ferguson, former Vice Chair of the Federal Reserve System, Ralphael Bostic, current president of the Federal Reserve Bank of Atlanta, and former Fed Governor Sarah Bloom Raskin, all have implied probabilities of 2% or less on PredictIt.org. President Biden could very well pick one of these individuals to whom betting markets assign a low probability, or he could choose an individual who is completely off the radar screen at present. But because Chair Powell and Governor Brainard appear to be the front-runners now, we focus on their policy views in this report.

One of the most important and most recognized responsibilities of the Federal Reserve is to formulate the monetary policy of the United States. The monetary policy decisions of the Federal Reserve are made by the Federal Open Market Committee (FOMC) and not simply at the discretion of the Chair. The FOMC, which when fully staffed has 19 members, 12 of which vote at each meeting, is a collaborative and consensus-seeking body.2 De jure, the Fed Chair simply has one vote among 12 voting members of the FOMC, and is only one voice among the 19 committee members. De facto, the Chair tends to be one of the most influential FOMC members, and many committee members defer to the Chair. So the choice of whom that individual is obviously is important to the formulation of U.S. monetary policy.

Where the views of Powell and Brainard seem to diverge somewhat is in the realm of regulatory policy, another important responsibility of the Federal Reserve. Over the past three years, Governor Brainard has dissented 23 times on regulatory votes by the Board of Governors. While dissenting votes are not rare, Brainard’s initial dissent in April 2018 was the first since 2011 and there has been only one dissent by other members in her time at the Federal Reserve. Brainard’s dissents have largely come on votes relating to the easing of regulatory policies that were created in the wake of the 2008 financial crisis. She has pushed back against changes to the Volker rule and swap margin requirements as well as adjustments and decisions relating to the Comprehensive Capital Analysis and Review, or bank “stress tests”. Although Brainard has voiced support for easing regulatory constraints on community banks, she has voted against actions to ease regulatory requirements for medium-sized banks ($250 to $700 billion in assets) and foreign banking organizations. Similarly, Governor Brainard has been critical of mergers of these medium-sized banks as well as other acquisitions in the financial services space, voting against two and abstaining on three others.

Powell, by contrast, has been supportive of revisiting the post-financial crisis rule book to simplify reporting and easing requirements on smaller banks in his public comments. Given his role at the helm of the consensus-driven Board of Governors, it is not surprising that he has not dissented on any measures that have come up for vote in his time as Fed Chair. Powell also voted in line with the rest of the Board in his time as a Governor from 2012-18, when the Fed was generally tightening rather than easing regulations.

Minimal Impact on Economic Outlook Over the Next Few Years

As noted previously, we do not believe there is a material difference between Powell or Brainard for the outlook for U.S. interest rates. However, different views on regulatory policy could potentially have implications for credit growth, especially if it takes the form of requirements for more bank capital. As shown in Figure 1, loan growth was quite weak for a few years after the 2007-2009 downturn. These years coincided with a rebuilding of the banking system’s capital base and a strengthening of that base relative to the years prior to the downturn. However, there are many other factors that determine loan growth. A perceived lack of growth opportunities and hesitancy among borrowers to take on loans in the aftermath of the housing bust also contributed to the weakness in credit growth in those years. But everything else equal, a stricter regulatory environment for banks could potentially exert some marginal downward pressure on loan growth. That said, a robust regulatory environment can also reduce systemic risk in the financial system, thereby reducing the probability of financial booms and busts. 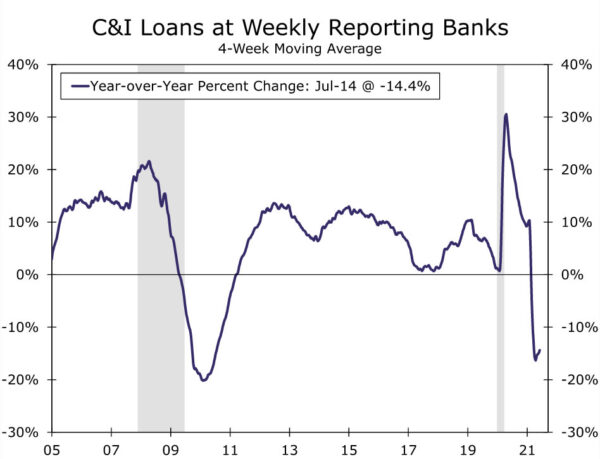 While a stricter regulatory environment for banks could potentially exert some downward pressure on loan growth, current conditions suggest it likely would take a radical shift to move the needle over the next few years. The financial system is swimming in liquidity at present, as evidenced by excess bank reserves and record usage of the Fed’s reverse repo facility (Figure 2). The capital positions of the nation’s commercial banks also seem to be in solid shape. Even under the Fed’s most recent stress test, capital ratios would still be more than double the minimum requirements.4 Moreover, credit extension is unlikely to be the first relief valve for banks when facing tighter regulatory policy. Stricter requirements would likely first lead to some paring back of capital distributions (i.e., dividends or share repurchases). But given the opportunity cost of parking money at the Fed for 15 bps versus lending to businesses and households at higher rates of return, we suspect that the effect on loan growth from tighter regulation, should it occur, would likely be negligible. In short, we would not be inclined to make any changes to our economic outlook if President Biden chooses either Chair Powell or Governor Brainard. 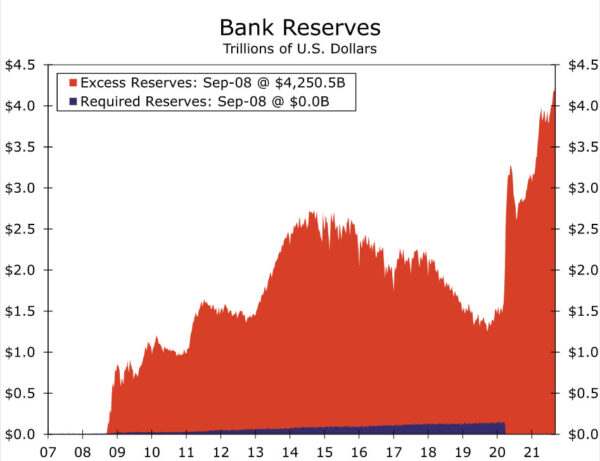 Conclusion: Three Chairs to Dance Around

The timing of President Biden’s decision is likely to be hastened by another key term soon expiring on the Board. Specifically, Randal Quarles’ term as Vice Chair for Supervision ends on Oct. 13, opening up a key opportunity for the administration to put its stamp on regulatory policy. Biden could reappoint Powell as Chair to give a steady hand to policy in what is still a turbulent time as well as to signal support for the Federal Reserve’s political independence. At the same time, Chair Powell is likely to be Biden’s path of least resistance through the Senate given Powell’s support on both sides of the aisle. Furthermore, Janet Yellen, former Fed Chair and current Secretary of the Treasury, has reportedly endorsed Powell for a second term.

Nominating Governor Brainard for the soon-to-be-vacant Vice Chair of Supervision would elevate her role at the Fed and install someone both experienced and more aligned with the Biden administrations’ regulatory philosophy. She would potentially have a more influential voice on regulatory matters, which are decided by the seven-member Board of Governors, than on monetary policy, which is the prerogative of the 19-member FOMC. While the Biden administration has sought to appoint more leaders from diverse backgrounds, it will have another opportunity to do so when Richard Clarida’s role as Vice Chair of the Board of Governors expires in late January.

All told, it appears that the path of monetary policy is unlikely be affected much by the expiration of Powell’s term as Chair of the Federal Reserve System. Not only does he appear to be the overwhelming favorite, but in the event Brainard received the nod instead, her views on monetary policy are very closely aligned with the current Chair’s. Where there is a more noticeable difference between Powell and Brainard is in the realm of regulatory policy. However, given the current position of the banking system, it would likely take a radical change in regulatory policy, which does not appear to be in the offing, to have a discernable effect on lending and the economic outlook over the next few years, in our view.

1 Powell’s term as a Fed Governor ends on January 31, 2028. He could continue to serve as a Governor of the Federal Reserve System even if President Biden does not nominate him for another term as Chair.

3 The FOMC’s strategy is to achieve “maximum” employment and inflation of 2% over the longer run. But with inflation having previously undershot the 2% goal on a persistent basis, the Committee is now willing to tolerate an inflation rate “moderately” above 2% for some time so that inflation averages 2% over time.