As supply crunches hit global economies and inflation perks up, investors will look for any red economic signals in the Eurozone when flash Markit PMI figures for October come out on Friday at 08:00 GMT. The data are expected to provide a bitter taste on the matter, reflecting a fading economic recovery for another month, with the euro likely facing fresh headwinds against its recent bullish attempts.

Euro aims for weekly gains, but fundamentals are discouraging

The latest rebound in global bond yields knocked down the safe-haven Japanese yen, allowing the euro to mark its longest rally against the currency in many years after four months of declines.

Progress has also been made against the US dollar over the past two weeks after the plunge to a 15-month low. On this front, however, monetary policy divergence will probably remain a core drawback for the euro as the ECB is not aiming to depart from an ultra-loose policy settings in the foreseeable future unlike the Fed, which is on track to start tapering its massive bond purchase program later this year.

Having now conveniently distanced itself above the 1.1600 level and the 20-day simple moving average (SMA), euro/dollar is poised to meet the 1.1700 level, but the path could become rocky in the week ahead as the Eurozone flash Markit PMI for October will likely remind investors that fundamentals are currently not in favor of the single currency.

Particularly, the manufacturing PMI index is expected to keep decelerating for the fourth consecutive month, falling from 58.6 to a seven-month low of 57.0, whilst the services equivalent is also forecast to experience another notable pullback to 55.5 from 56.4 previously. Consequently, the composite PMI index could retreat to 55.2 from 56.2 in September. 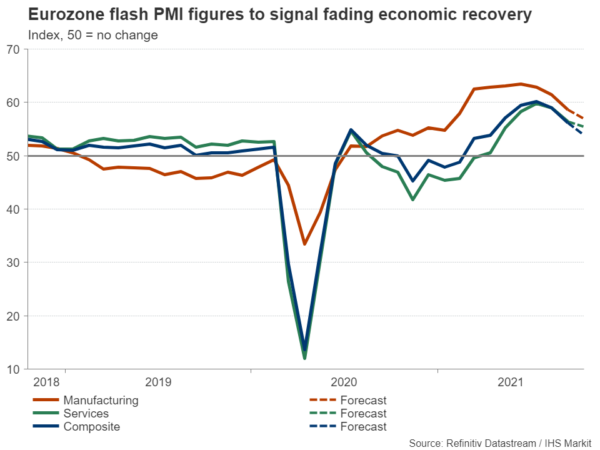 Undoubtedly, any reading above 50, and more importantly above the 2019 – 2020 ugly levels, is a sign of healthy expansion, though a continuous deterioration in PMI stats might lead investors to assume the impressive annual double-digit growth in the past three quarters has matured before the pandemic entirely takes halt.

The business PMI survey will probably reveal more pronounced struggles among companies to source materials and pay for higher energy costs, as well as find qualified workers at a time when demand remains resilient. Unless Eurozone governments hedge the sharp oil and gas price fluctuations through tax cuts or/and subsidies for grappling suppliers, consumers could see their utility bills skyrocketing during the coming winter months.

Perhaps the time for the Eurozone members to show more fiscal unity has arrived once again, but given previous prolonged debates in securing immediate solutions, someone could say this may become a long-term project instead. The problem is the longer inflation pressures persist in energy and utility sectors, the more impact will be felt in other industries and ultimately in the food-processing sectors.

Numerous nitrogen fertilizer plants have already temporarily shut down in Europe in the face of soaring gas prices, with Fertilizers Europe recently sending warnings of permanent closures as the solutions proposed by the European Commission are not enough to address the problem.

The European automaker association, which is being squeezed by the global semiconductor shortage, facing double-digit declines in car registrations during the past few months, has also admitted that supply constraints will linger well into next year.

Apparently, attempting to solve inflation and supply imbalances which are beyond national borders, is a hard task to accomplish in a short period. Hence, in a nutshell, business challenges could worsen in the coming months before getting better, causing some negative shockwaves in markets.

As regards the euro, negative surprises in Eurozone PMI data have been common during the past three months. Therefore, investors may not aggressively sell the euro if another miss happens despite the energy chaos intensifying. Nevertheless, if euro/dollar slides back below the 1.1600 mark, the door would open for the 15-month low of 1.1522.

Otherwise, investors could cheer on stronger-than-expected PMI figures, pushing euro/dollar above the nearby 1.1670 resistance and towards the key resistance trendline seen around 1.1750.