The USD dropped considerably against a number of its counterparts yesterday as mixed USD financial data released yesterday tended to weigh substantially on the greenback. The US GDP rate (Advanced) for Q3 decelerated more than expected reaching 2.0% qoq on an annualized basis implying a slowdown in the growth of the US economy while the weekly initial jobless claims figure also retreated implying a tightening of the US employment market. On the other hand, US stockmarkets remained in green territories with Nasdaq and S&P 500 reaching new record high levels as market optimism was boosted by the release of earnings reports. However, it should be noted that Apple missed analysts’ expectations for its revenue figure as supply chain shortages tormented the company and Apple CEO Tim Cook is reported to have said that the impact is to be even worse for the current holiday season, which could weigh on the share’s price. On other news, Mark Zuckerberg revealed that the new name for Facebook is to be “Meta” as the company concentrates on its new project, Metaverse and tries to become something larger than just a social media company. Today we note the release of the US consumption rate as well as the core PCE Price index both being for September, while for the US stockmarkets we note the release of the earnings reports for of Alibaba (#BABA), Chevron (#CVX), Exxon Mobil (#XOM), and Colgate Palmolive among others.

US 100 cash was on the rise yesterday reaching new record highs before retreating just below the 15715 (R1) resistance line. The index is currently teasing the upward trendline guiding it since the 25th of October and should it clearly break it we would initially switch our bullish outlook in favor of a bias for a sideways movement. If the bulls take over, we may see the index clearly breaking the 15715 (R1) resistance line with its next possible target being the 16000 (R2) round number. If the bears are in charge its direction, we may see Nasdaq breaking the prementioned upward trendline and take aim for the 15365 (S1) support level.

EUR gets a lift from ECB’s interest rate decision

The common currency got a lift against the USD,GBP and JPY yesterday and is about to end the week in the greens as buying traction was created by ECB’s interest rate decision. The bank remained on hold keeping the refinancing rate at 0.0% and the deposit rate at -0.50% as was widely expected and kept its QE program and PEPP target also unchanged. The bank reiterated its view about the transitory nature of the current inflationary pressures which are to accelerate even further, and ECB President made no effort to conceal the bank’s worries about the issue. On a fundamental level, we maintain our worries for the energy crunch of Europe as well as the supply shortages, especially about semiconductor chips despite some positive signals coming from the ECB, which could slow down the economic recovery of the area. Also it should be noted that Germany’s preliminary HICP Rate for October accelerated slightly more than expected increasing the bullish sentiment for EUR while today we highlight the preliminary HICP rates for France and the Eurozone as well as the preliminary GDP rates for Q3 for Germany, France and the Eurozone as a whole.

Besides the financial releases already mentioned we would like to note the release of China’s manufacturing NBS and Caixin PMI figures for October on Sunday and Monday’s Asian session. 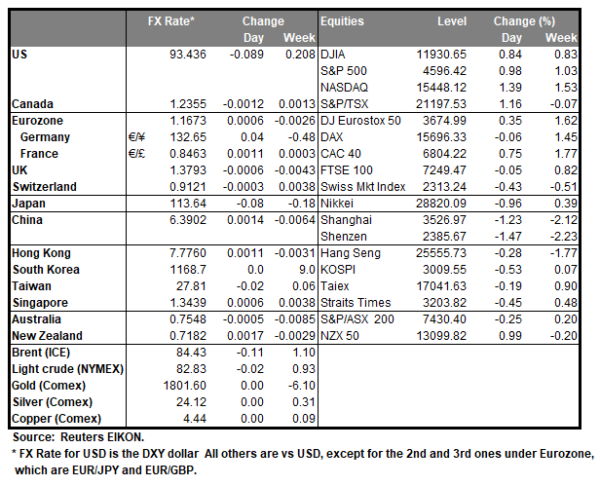 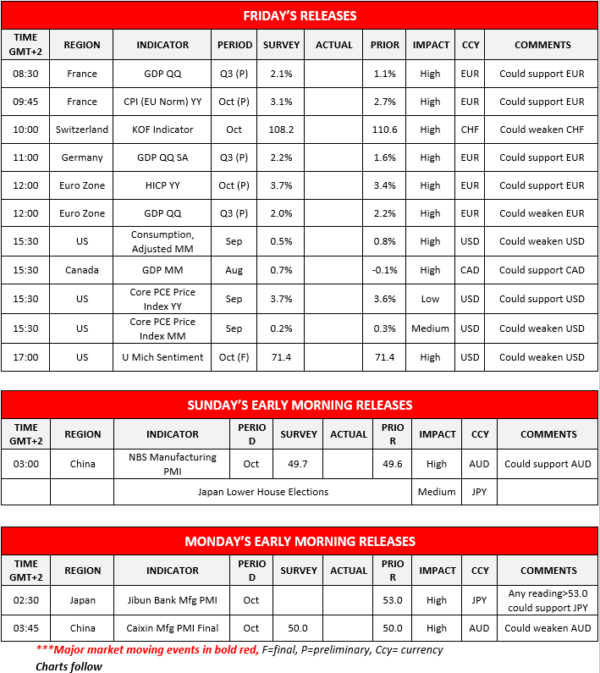