The ‘mighty’ dollar has deepened its dive against the majors as investor caution on the currency grows.

Currently, there is no get out of ‘jail free card’ for long dollar investors who weathered another night of fresh selling, a day after the dollar index notched a 2½-year low – year-to-date, the index is down -9.2%.

In the eurozone, a robust economic recovery amidst low inflation has helped the EUR to surge more than +14% outright this year. During Thursday’s press conference, ECB President Draghi expressed concern about the currency’s strength without offering any proposal on how to address it as policy makers’ edge toward unwinding QE in the autumn. 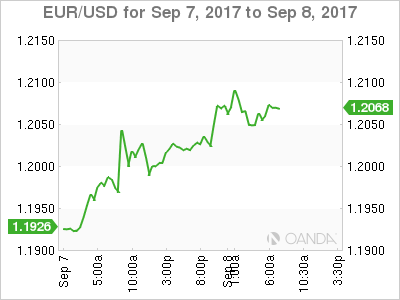 Note: The ‘smart’ money was short EUR’s or small core ‘long’ heading into yesterday’s ECB press conference – many had expected Draghi to address the pace of EUR appreciation, when that did not materialize, the market then scrambled to own the EUR to offset some shorts and for a positional buy looking for a further move up in EUR/USD on a 6-12 month horizon (€1.25-27).

The lack of progress and market faith in ‘Trumponomics’ – program of infrastructure spending, tax overhaul and regulatory cutbacks would cause long-muted U.S growth to accelerate – has the dollar struggling on growth and rate differentials.

Further market doubts that the Fed has the ammo, or the will, to hike interest rates again this year, given soft inflation, has intensified this week, in particular, after Hurricane Harvey mass destruction in Texas and the prospect of an even-stronger storm from Irma battering Florida this weekend. 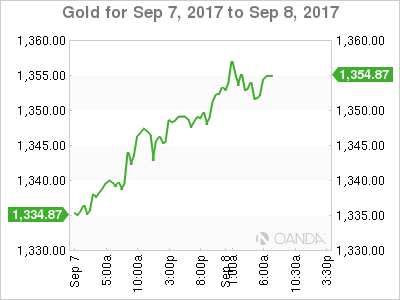 Haven moves are also at play, with rallies in precious metal and government debt.

Gold is at its highest in 12-months, printing +$1,350 an ounce, while there has been broad buying of global debt in recent days, further flattening sovereign yield curves.

The market is also concerned that North Korea will launch another missile in the next 24-hours, when the country celebrates its founding. The fear has caused a further uptick in the demand for sovereign debt – U.K 10-year Gilt yields fell back under the psychological +1% (+0.97%) overnight, while 10-year JGB’s fell below zero and U.S 10-year product trades atop of the psychological +2%. 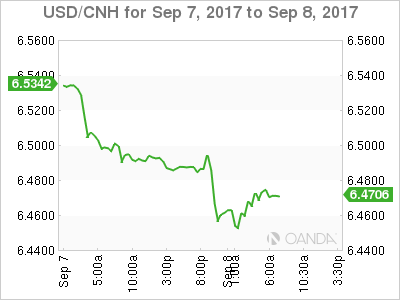 In China, authorities have strengthened the Yuan guidance for the tenth consecutive day.

The People’s Bank of China (PBoC) set the ‘fix’ at ¥6.5032 vs. ¥6.5269. Still, the PBOC’s guidance fell short of market expectations given yesterday’s strength in the currency.

With the absence of intervention by China has given the market the ‘thumbs up’ to aggressively dump dollars – intraday, the yuan traded as high as ¥6.4617, its highest level in 18-months. 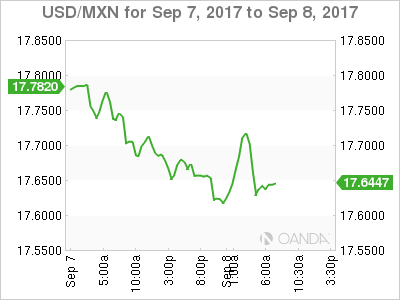 In Mexico, the most powerful earthquake (magnitude 8) this century has shook the country, adding to investor anxiety and sending the MXN ($17.64) lower.

Three things that Bank of Canada’s (BoC) Poloz has done with Wednesday’s surprise hike – a gradual approach to rate rises is now a ‘myth,’ the hike came at a decision-only meeting (without press conference), and most importantly throws into the doubt the markets view that Poloz preferred a weaker CAD.

Intraday, CAD is very much overbought, but there is ‘no’ reason to want to sell it at the moment. C$1.2030 is very strong dollar support – the USD needs to break above C$1.2350 – C$1.25 with conviction to get any dollar traction. With another Fed rate hike being priced out this will be difficult to sustain.

In the medium term, any USD rallies will see CAD buying to target C$1.1950-1.20. However, the ‘elephant’ in the room remains NAFTA negotiations. 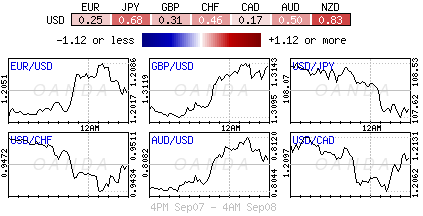