The European Central Bank’s (ECB) December 16 monetary policy meeting will likely be the most consequential in some time, as policymakers grapple with conflicting trends in growth (slowing) and inflation (quickening), and consider whether to bring bond purchases under the Pandemic Emergency Purchase Program (PEPP) to an end. In recent comments, ECB President Lagarde suggested that some adjustments could be announced at this month’s meeting. Speaking to Reuters, Lagarde said the ECB may set policy for a relatively short period at this month’s meeting given heightened uncertainty, but should not delay a decision as markets need direction.

As policymakers and market participants head into the December meeting, there are overall signs of slowing Eurozone growth. The manufacturing and service sector PMIs have been steadier in recent months, printing at 58.4 and 55.9 for November respectively. However, they are still well below the highs seen earlier this year, with the manufactruing PMI peaking at 63.4 in June and the services PMI peaking at 59.8 in July. In addition, COVID cases have recently rebounded across the region and some countries have reimposed partial restrictions—notably Germany and Austria—prompting some near-term uncertainty to the outlook. At the same time, CPI inflation spiked higher to 4.9% year-over-year in November, although the acceleration in the core CPI so far has been somewhat less marked, to 2.6% year-over-year. 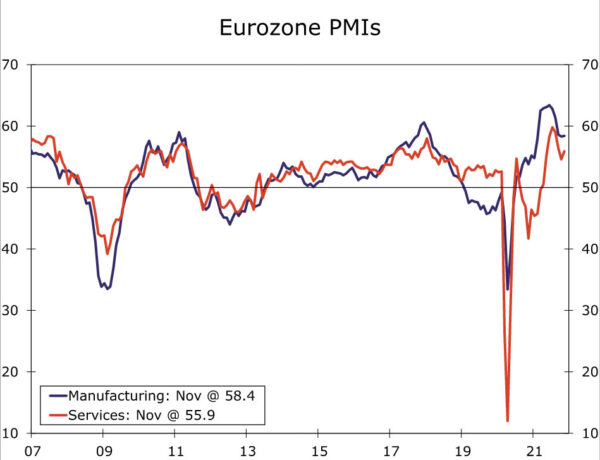 These divergent growth and inflation trends pose something of a dilemma for ECB policymakers. That said, ECB President Lagarde in recent comments also said Europe has learned to live with previous COVID variants, suggesting the central bank may view downside risks from the latest virus developments as moderate, and not an impediment to adjusting its monetary policy stance. Moreover, comments from ECB policymakers have generally been very consistent in two particular areas. First, in recent weeks several central bank policymakers have indicated that the Pandemic Emergency Purchase Program should come to an end, as previously signaled, by March 2022. And second, despite the sharp uptick in prices most ECB policymakers still appear to view the current rise in inflation as a temporary phenomenon and that, while it might take a little longer for inflation to slow, it should certainly be receding by late 2022. 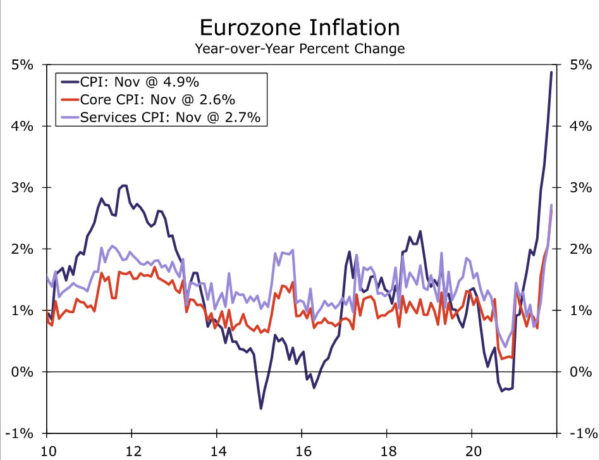 It is against this backdrop that at the December meeting, we expect the European Central Bank to announce plans to make some initial tentative steps towards less accommodative monetary policy, beginning in early 2022. Specifically, we expect at its December meeting the ECB:

While we expect the European Central Bank will announce its asset purchase plans only a quarter at a time, in keeping with Lagarde’s comment of avoiding long-term commitment, we ultimately believe the ECB will taper its bond purchases only gradually through all of 2022, and will not discontinue its purchases until the end of next year. After APP purchases of €50B per month in Q2-2022, we expect APP purchases of €25B per month in Q3-2022 and Q4-2022, with purchases coming to an end in December next year.

Finally, the ECB’s announcement will also include updated staff economic projections. We expect a downward revision to the central bank’s GDP growth forecast and, clearly, a significant upward revision to CPI inflation forecast. However, we still expect the ECB will forecast CPI inflation falling back below 2% by the end of its forecast horizon. In terms of market reaction, it is possible the initial reaction to the ECB’s announcement could be modestly EUR/USD positive. Significant upward revisions to CPI inflation forecasts, combined with only a short-term commitment to ongoing bond purchases, could disappoint some market participants looking for a more forcefully dovish announcement. Still over time, given the Fed likely will both taper its bond purchases and raise interest rates more quickly than the European Central Bank, we believe the longer-term implications of the European Central Bank’s relatively gradual shift towards less accommodative monetary policy will be a softening trend in the EUR/USD exchange rate over the medium-term. 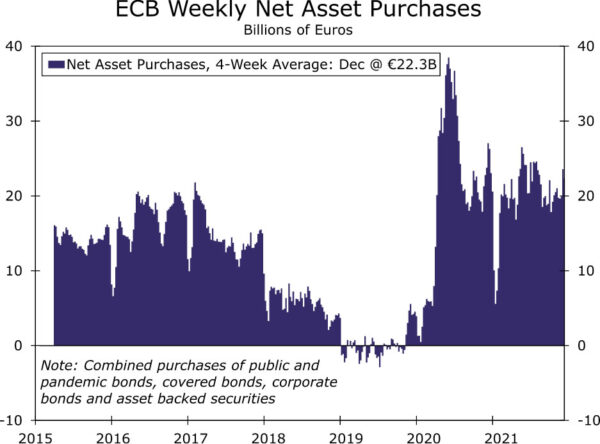