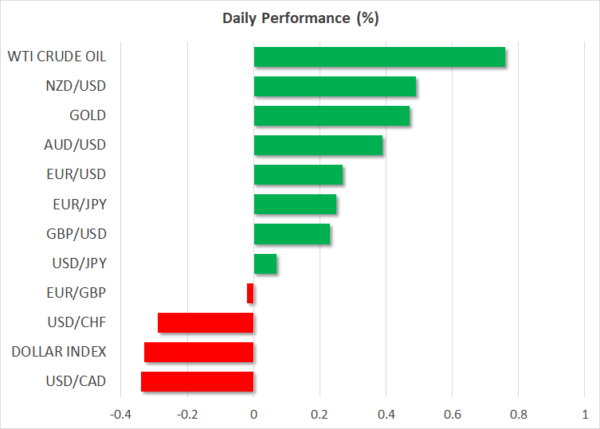 No stimulus? No problem

What a crazy market. The Federal Reserve was as hawkish as possible yesterday, doubling the pace at which it reduces asset purchases and signaling three rate increases for next year. But despite the central bank hitting the brakes with full force, stock markets rallied furiously and the dollar retreated with its tail between its legs once the dust settled.

Several arguments have been floated to explain this puzzling reaction, from equity traders heading into the event loaded with defensive hedges and hence unwinding them afterwards to diminishing fears around inflation now that the Fed is reacting to it. Ultimately the simplest answer is that another dip was bought relentlessly, as there’s still so much excess liquidity sloshing around the system.

The dollar mirrored the shift in risk appetite, falling as stock markets powered higher and only managing to outperform the defensive Japanese yen. Still, the bigger picture hasn’t changed. The US economy has staged one of the most impressive comebacks ever, and with the Fed gearing up for rapid rate increases, carry trades that favor the dollar over the euro and yen could become a dominant force moving forward.

The European Central Bank will have some tough decisions to make when it concludes its own meeting today. Inflation has accelerated dramatically thanks to surging energy prices and the storm in supply chains, yet the outlook for growth remains gloomy. The latest PMIs from Germany are a testament to this slowdown, with the services sector slipping into contraction as covid restrictions hamper activity.

Against this backdrop, the ECB will have to decide by how much to slash its asset purchases. Admittedly, it’s a tough spot. Do nothing and you risk pouring more fuel on the inflationary fire. Cut back too much and you might shock the bond market, risking a spike in yields that cripples highly-indebted economies like Italy.

Hence, the most likely compromise is the ECB reducing the pace of its asset purchases by about half, from EUR 80 billion per month currently to around 40 billion in total. The reaction in the euro will depend mostly on how deeply QE purchases are cut and any signals around future rate increases.

Even if the market decides the ECB was relatively hawkish and the euro spikes even higher, it’s difficult to envision any rally being sustained for long. The European recovery is rocky and money markets will likely have to price out the minor rate increase that is still baked in for next year.

BoE – No rate hike for Christmas

The Bank of England decision will also be tricky as markets are pricing in about even chances for a 15 basis points rate increase today. Yet that seems highly unlikely. The economic conditions for a rate hike have arguably been met already, but the chilling covid wave that’s currently sweeping the country doesn’t allow the BoE much room for maneuvering.

As such, there might be a negative knee-jerk reaction in the pound today if rates are indeed kept unchanged, especially if that’s done by a unanimous vote. Beyond the initial reaction though, sterling’s fortunes will depend on what the BoE signals about future hikes as investors expect almost four of them next year.

Finally, the Swiss National Bank did not announce anything new today. Early on Friday, the spotlight will turn to the Bank of Japan, which is unlikely to rock the boat either. Elsewhere, the carnage in the Turkish lira continues ahead of an expected rate cut today. 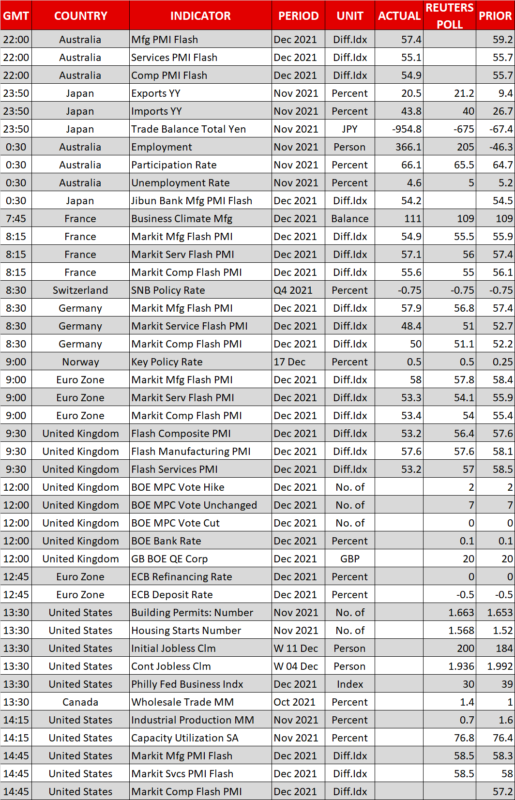