The main event this week will be the Fed’s policy decision at 19:00 GMT Wednesday. No action is expected, but with the markets pricing in four rate increases for this year, the central bank is likely to signal that normalization is imminent. There is also some speculation that asset purchases could come to an immediate end. That will likely decide the reaction in the dollar.

The US economic recovery has been very impressive. The economy is already much larger than it was before the crisis, the labor market is tight by several metrics, consumption is strong, and inflation is running at the fastest pace in four decades.

Wages have also started to fire up as companies compete to attract workers. That’s crucial for the Fed because it implies that inflationary pressures might not cool by themselves once supply chains normalize and energy prices stabilize. 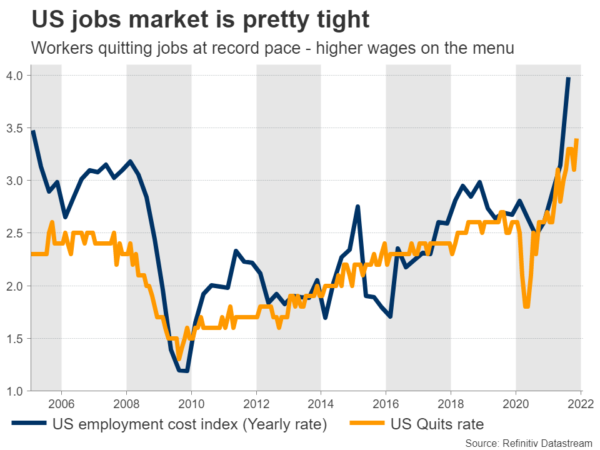 As a result, market participants are betting the Fed will step on the brakes, currently pricing in four rate increases for this year. Beyond rate hikes, another crucial variable for traders is when and how aggressively the Fed will begin shrinking its balance sheet.

Turning to this week’s meeting, no action is anticipated. Instead, the central bank is merely expected to signal that rate hikes are on the menu soon, essentially preparing the ground for liftoff in March.

The twist is that some strategists are calling for asset purchases to come to an immediate halt. At its previous meeting the Fed said it would stop them in March, but with the US economy being so strong and inflation roaring, many argue there’s no real benefit in continuing to buy Treasuries and mortgage-backed securities. 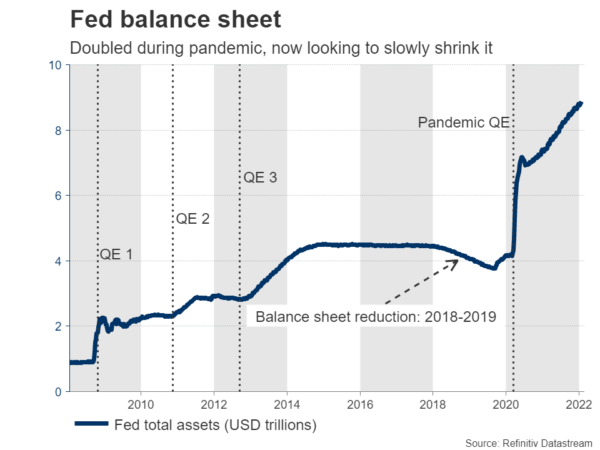 While that is true, the Fed also doesn’t want to shock financial markets. Even though equity markets have declined substantially and Treasury yields have soared in the past few weeks as traders priced in much of what the Fed will do this year, there hasn’t been any sense of panic selling.

The Fed wants to keep it that way. Ending asset purchases one month early would only stoke panic, without delivering any meaningful benefits in fighting inflation. Such a move wouldn’t make much sense from a risk management perspective.

Therefore, if the Fed sticks to its current plan to end asset purchases in March, the initial reaction in the dollar may be slightly negative as those looking for an early stop are left disappointed.

Looking at dollar/yen from a technical perspective, the pair could encounter immediate support near the 113.45 level, a violation of which would turn the focus towards 112.70.

On the upside, the first target for the bulls may be the 115.00 region.

In the bigger picture, the outlook for the dollar remains favorable over the next few months. The US economy is booming and although the markets have already priced in much of what the Fed will do this year, the pricing for next year still has some room to grow.

Money markets are currently pricing in less than three hikes for next year, which may turn out to be too conservative. Hence, Treasury yields can still move higher, widening the dollar’s interest rate advantage. 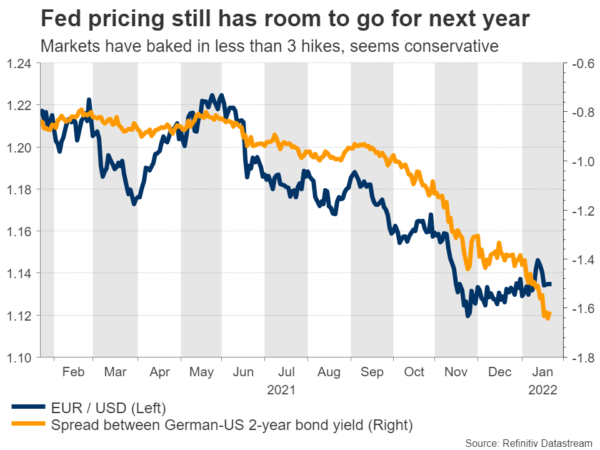 Likewise, the dollar tends to perform well during periods of market stress thanks to its status as the reserve currency, which may come in handy if the rest of the year is as volatile as January has been.

The main risk to this view would be any signs of ‘peak inflation’ in the coming months. If investors sense that the wild days of inflation are behind us already, they could dial back bets for aggressive Fed tightening. However, that’s probably a story for March or even later.

Finally, note that beyond the Fed meeting, there’s also a barrage of US data releases this week, including the first estimate of GDP for the last quarter on Thursday.