US inflation data came out stronger than expected yesterday, which triggered an impulsive wave of dollar appreciation and a sell-off in risky assets, sending Bitcoin briefly below $19K. However, it is essential to note that the first cryptocurrency found buyers quite quickly on the decline to these levels and has already more than recovered its losses. This is a notable moment, as crypto has often taken on the role of a leading indicator of market sentiment in recent months.

According to KuCoin, cryptocurrencies are popular in Saudi Arabia, with around 3 million residents investing in digital assets.

Bitcoin may continue to fall but will hit another all-time high in the next 24 months, according to CoinShares. At the same time, the rate is not expected to fall below $14,000.

The US Treasury Department has sought public comment on digital assets’ potential benefits and risks. According to President Biden’s executive order, the Treasury is to study the impact of cryptocurrencies on the financial system, economic growth, and national security.

The Bank for International Settlements (BIS) has called for central banks to create “bridges” between the various national digital currencies (CBDC) that would allow tokens to interact with each other. 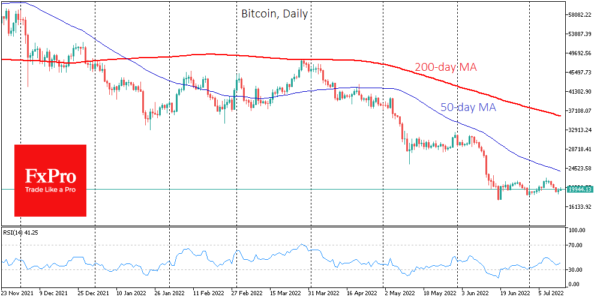