FOMC Raises Rates by 75 bps and Indicates More to Come

FOMC Raises Rates by 75 bps, but Downgrades Assessment of the Economy

As widely expected, the Federal Open Market Committee (FOMC) raised its target range today for the federal funds rate by 75 bps, bringing the top end of the range to 2.50%. There was widespread support for another supersized rate hike—the FOMC raised rates by 75 bps at its last meeting in June—as all 12 voting members of the Committee voted in favor today. The FOMC has now hiked rates by 225 bps since March, a pace of tightening that has not been experienced in more than 40 years. 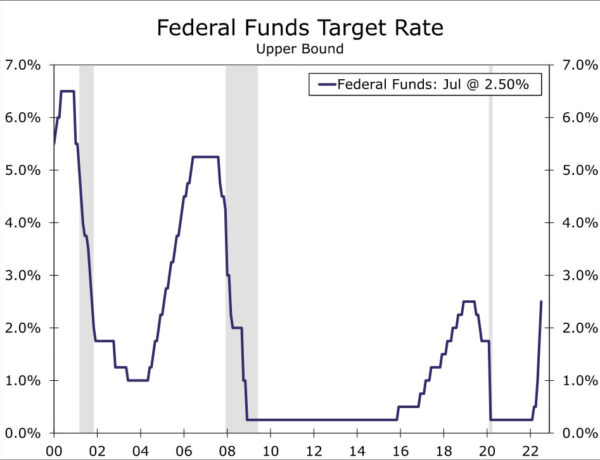 In explaining its decision to tighten policy further today, the Committee again pointed to the fact that “inflation remains elevated.” Indeed, the year-over-year rate of CPI inflation rose from 8.6% in May to 9.1% in June, which was higher than most market participants, and likely most FOMC members, had expected at the time. The statement also reiterated that “the Committee is strongly committed to returning inflation to its 2 percent objective.” This sentence, which was used previously in the June statement, in conjunction with the unanimous vote to raise rates by another 75 bps today, indicates that inflation remains forefront in the minds of most FOMC members.

That said, the FOMC downgraded its assessment of the current state of economic activity. Following the June FOMC meeting, the Committee noted that “overall economic activity appears to have picked up.” But today’s statement began with the following sentence: “Recent indicators of spending and production have softened.” In that regard, the ISM services index, which measures the pace of activity in the service sector, has moved lower in recent months, although it remains above the line separating expansion from contraction. The comparable index for the manufacturing sector also moved lower in June Real GDP data for Q2-2022 are slated to print Thursday morning at 8:30 EDT. Although we project that real GDP inched higher in the second quarter, a negative print is entirely possible. If so, then real GDP would have contracted for two consecutive quarters, although as we discuss in more detail in a recent report, that outcome, should it occur, would not necessarily mean that the economy is currently in recession. 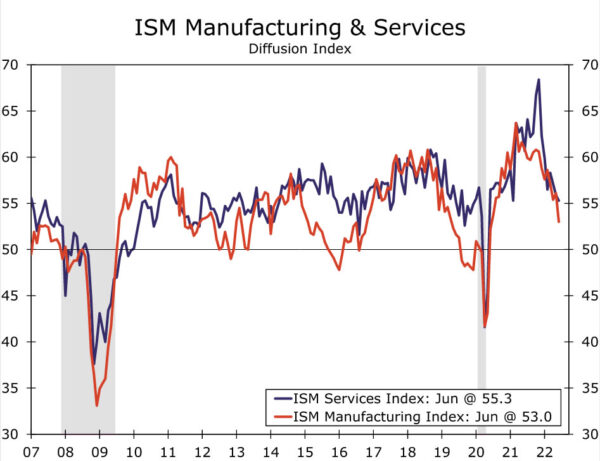 Looking forward, the Committee indicated that more tightening is likely. When the FOMC hiked rates by 75 bps on June 15, the statement said the Committee anticipated that “ongoing increases in the target range will be appropriate.” Today’s statement repeated that phrase. So how much tightening should we expect at the next FOMC meeting on September 21? We currently expect another 75 bps rate hike on September 21, but we readily acknowledge that the degree of tightening will depend crucially on incoming data over the intervening period. Four data releases stand out to us as vitally important. Specifically, there will be two employment reports (August 5 and September 2) and two CPI releases (August 10 and September 13) between now and the next FOMC meeting. If the labor market reports show continued strength and/or CPI inflation continues to come in hot, then yet another 75 bps rate hike would be likely. Conversely, if the employment reports show signs of labor market weakening and/or inflation comes in lower than expected, then the FOMC likely would opt to raise rates by a smaller amount.

In short, the FOMC is edging into data dependency mode. That is, the Committee has wanted to raise rates as fast as possible in recent months to get the fed funds rate back to some measure of “neutral.” (“Neutral” is the setting of the fed funds rate that is neither stimulating the economy nor restraining it). Although there is no precise estimate of “neutral,” most FOMC members would place it somewhere in the vicinity of 2-1/2% based on the Summary of Economic Projections. Our inference of the onset of data dependency mode was supported by a statement by Chair Powell in his post-meeting press conference. Specifically, Powell said that the pace of further tightening “will depend on incoming data and the evolving outlook for the economy.” Stay tuned.