Business sentiment in Germany continued its substantial deterioration in September. The Ifo says the business climate index fell from 88.6 to 84.3 this month. The index has only been lower for two months in its history – in April and May 2020. The actual figures were weaker than expected, at 86.9 and marked a deterioration in the current assessment and economic expectations. 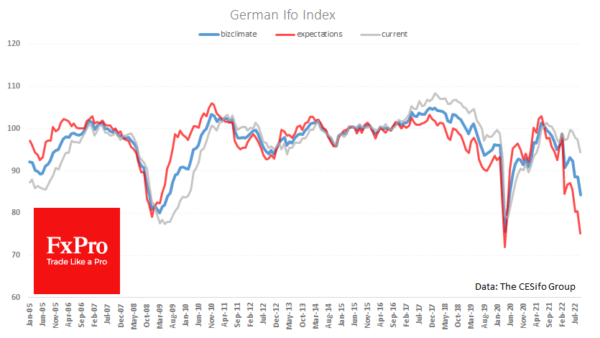 As usual, forward-looking markets pay more attention to the development of the expectations component, which recorded its second-lowest fall in history in September from 80.5 to 75.2. However, optimists may note that the current conditions did not deteriorate too sharply. The Index of Current Conditions in September fell from 97.5 to 94.5 against a historical average since 2005 of 96.7.

From the latter, it can be concluded that the brunt of the crisis in Germany is still only in the “heads” of the businessmen but could quickly become a self-fulfilling prophecy if expectations do not turn sharply upwards in the coming months.